The so called "paper bag parties" required people to pass the "brown paper bag test" in order to be admitted. If you were lighter than a brown paper bag, you could go to the party. Since women could attempt to lighten their skin with make-up, the bag was usually placed against an exposed arm. However, not all paper bag parties had visible paper bags. And, although the practice is universally condemned, there is still the notion that the ideals behind the practice survived. In 1982, Alice Walker coined the term "colourism" which refers to the form of discrimination that is based on social values that are associated with skin colour. 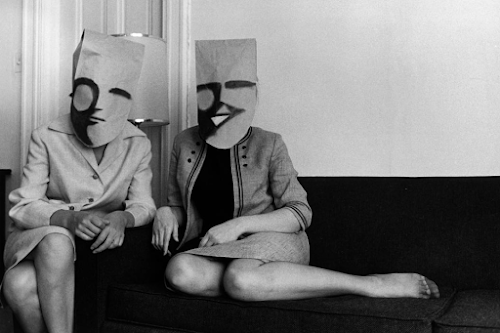 - Kerr, A. E. (2006) The Paper Bag Principle: Class, Colorism, and Rumor and the Case of Black Washington. University of Tennessee Press
- photograph taken by Inge Morath (Saul Steinberg, "The Mask Series") via

Update 2017: Photograph has been changed
Posted by M. Laura Moazedi