"As I stood on the edge of the Germany's historical abyss, feeling the burden of millions of murders, I did what people do when words fail."
Willy Brandt 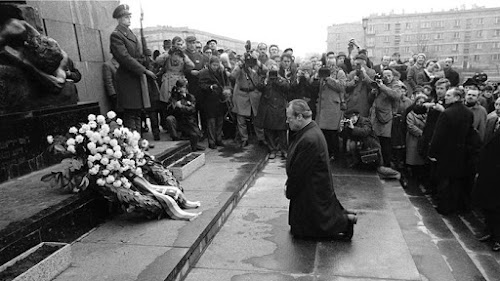 On 7 December 1970, German Chancellor Willy Brandt (1913-1992) visited a monument to the Warsaw Ghetto Uprising (about 13.000 Jews were killed by Nazis during the uprising in 1943, thousands more died in the Warsaw concentration camp that was established soon after the uprising or were executed in the ruins of the Warsaw Ghetto, ...). Willy Brandt visited the monument, lay down a wreath ... and spontaneously fell to his knees. Brandt remained silently in that position - on his knees, head bowed low - for twenty or thirty seconds surrounded by people who were awe-struck. Polish politicians were astonished, Polish intellectuals have been admiring him ever since. But his kneeling in front of the monument also made him a target for hostility and hatred. For his gesture of humility and penance, Brandt received a great many letters from people saying they wished to see him hanged, that they would like to pinion him against a wall; he was called "traitor of the home country". The majority of Germans felt his humility was exaggerated (48%: "excessive", 41%: "appropriate", 11%: "no opinion"). In 1971, Willy Brandt was awarded the Nobel Peace Prize (it is thought that his gesture in front of the monument was one of the reasons why he was awarded the prize). His landslide win in the 1972 elections showed that more and more people supported his "Ostpolitik" that was symbolised by his genuflection (via and via) and that communicated that Germany was no longer a country other nations had to be afraid of.

"I have been often asked what the gesture was all about. Was it planned? No, it wasn't."
Willy Brandt 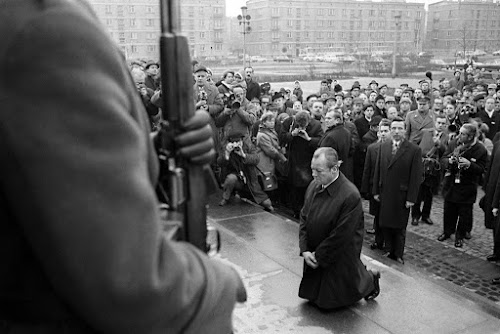 "We have a strong tendency to view the year 1989 as the beginning of European development, basically, the beginning of our new political era. It's true that this is the turning point in Europe. If you open your eyes wider, the year 1970 was the turning point in Polish-German relations in the political sense."
Janusz Reiter, Poland's first ambassador to the reunified Germany 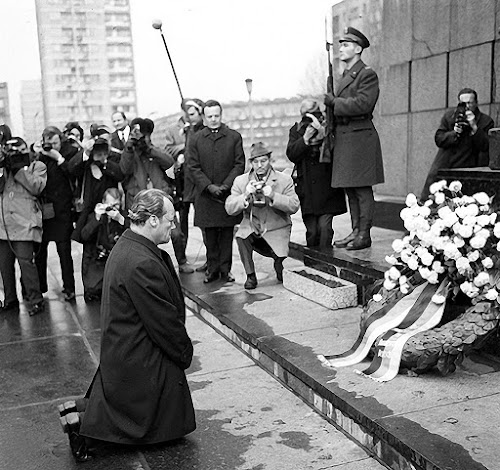 "Brandt walked forward, Scheel half a step behind him, and behind them both came a wreath of white carnations carried by two Polish civilians, who set it down in front of the monument. Brandt straightened out the red, black and gold German banner, on which was written 'The Chancellor of the Federal Republic of Germany'. At that moment he was the symbol of his title, his position, his country. He took a step back and stood still, without saying a word. Suddenly, he dropped to his knees and crossed his hands in front of himself, his face immobile. He stayed a long time in that position, the only thing audible was the clicking of cameras, the stifled sobs of an old woman in the crowd. No words were needed to understand that the Chancellor was begging forgiveness in the name of the German people for the crimes committed by their nation. As the Spiegel journalist Hermann Schreiber said, 'here is a man kneeling when he has no need to do so, in the name of all those who should kneel and do not.' That the gesture came from a German who had done nothing to be reproached for, and who had even fought against the Nazis' barbarism, made clear that it meant to 'accept the past' for post-Hitler Germany."
Miard-Delacroix (2016)