The Nonstereotypical Role of Lieutenant Uhura

"It didn't hit me at the time until somebody told me. I splashed onto the TV screen at a propitious historical moment. Black people were marching all over the South. Dr. King was leading people to freedom, and here I was, in the 23rd century, fourth in command of the Enterprise." (via) 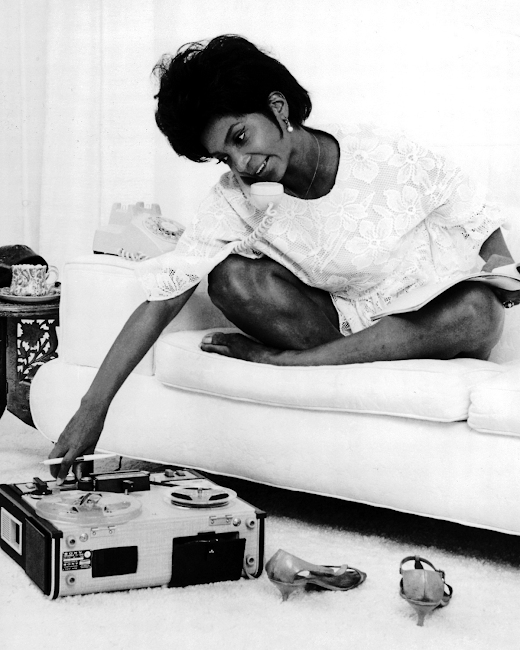 "Oh, man, there were parts of the South that wouldn't show 'Star Trek' because this was an African American woman in a powerful position, and she wasn't a maid or tap dancer." (via)

Nichelle Nichols, born Grace Dell Nichols, portrayed Communications Officer Lieutenant Nyota Uhura aboard the USS Enterprise in the Star Trek series, "one of the first non-stereotypical roles assigned to an African-American actress" (via). When Whoopie Goldberg first watched Star Trek in 1966, she yelled out: "Momma! There's a black lady on TV, and she ain't no maid!" (via). As Levine writes on NASA's website, Nichols has warped to many worlds as Lt. Uhura but her real-life adventures have taken her to where no one has gone before. She inspired and encouraged women and black US-Americans to become astronaut candidates, among them Ronald Ervin McNair and Mae Jemison, the first black woman in space (via) who, by the way, called Nichols her childhood idol and made a cameo appearance on Star Trek: The Next Generation in 1993 (Evans, 2014).

Not everybody was amused about seeing a black woman as a lieutenant on Starship Enterprise. The 1960s were dominated by segregation and while her colleagues did not discriminate against her, other parts of the studio and the show photographer did.


"That's right. There were instances where I was turned away from entering the studio at the walk-on gate, and I had to go all the way around to the front gate, sign-in and come back. A guard on the set told me I had no right being there -- that they had replaced a blue-eyed blonde with me." (via)

"I went through crap, man. Racism was alive and rampant there. Some people said I wasn't good enough, saying things like, 'I don't know how you got this role.' And they kept waiting for me to complain and raise hell about it, but I decided to ignore it. I never went to Gene [Roddenberry] about it." (via) 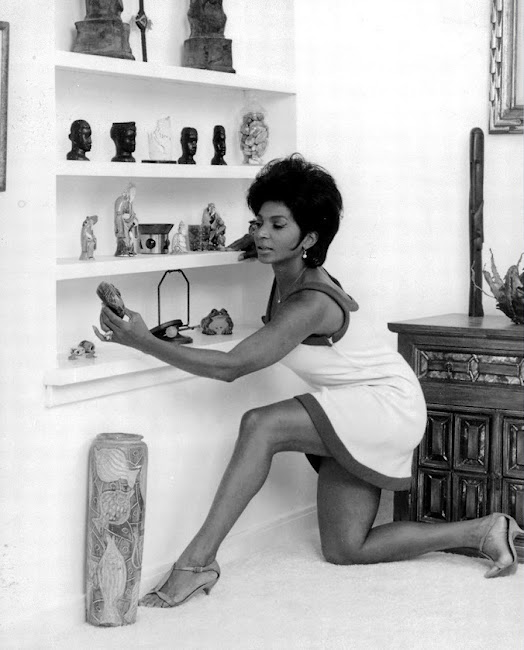 "It had been OK'ed, script-wise, and we went into production for that episode. After the first take, the director yelled 'CUT!' and came over, saying, 'Bill, what are you doing? You actually kissed her!' And Bill said, 'Yeah, I can't get her to let me do it any other way except that it was written in the script. So, what's the problem?' And the director said, 'The South -- they'll kill us.'" (via)

In the third season, Star Trek's progressive attitude made television history. The episode "Plato's Stepchildren", which aired in November 1968, became famous for "the kiss". "White" Captain Kirk kissing "black" Lt. Uhura was a clear message. Segregation meant that on TV, blacks and whites had absolutely no physical contact. The same year, NBC had expressed concern because British actress and singer Petula Clark had touched Harry Belafonte's arm in a muscial sequence singing "On the Path of Glory" (via). The sponsor insisted the touch be cut out of the programme, producer/director Steve Binder refused (via). Variety ended its review with the words: "... the touching bit which caused such a stir ... could only disturb the spiritually sick" (via). "Plato's Stepchildren" received a huge and mostly positive response:


"We received one of the largest batches of fan mail ever, all of it very positive, with many addressed to me from girls wondering how it felt to kiss Captain Kirk, and many to him from guys wondering the same thing about me. However, almost no one found the kiss offensive" except from a single mildly negative letter from one white Southerner who wrote: "I am totally opposed to the mixing of the races. However, any time a red-blooded American boy like Captain Kirk gets a beautiful dame in his arms that looks like Uhura, he ain't gonna fight it." (via)

In the episode's original script, Uhura and Spock were supposed to kiss each other. According to Nichelle Nichols the scene changed when Shatner took a look at it:


"My understanding is Bill Shatner took one look at the scene and said, 'No you will not! If anyone's going to be part of the first interracial kiss in television history, it's going to be me!' So they rewrote it." (via) 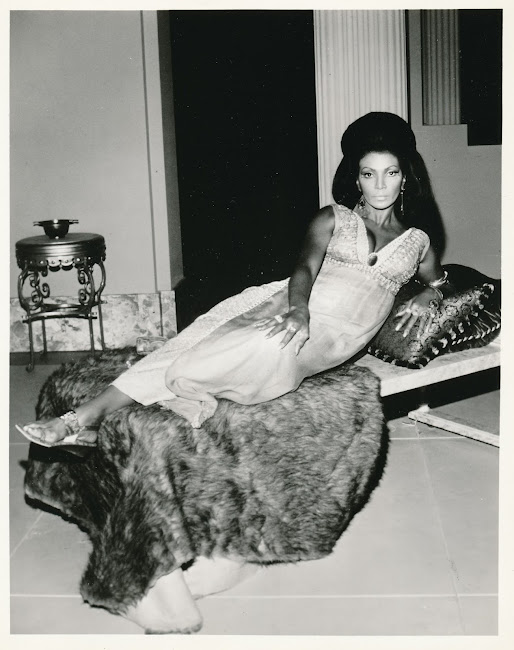 "Star Trek was one of the only shows that [King] and his wife Coretta would allow their little children to watch. And I thanked him and I told him I was leaving the show. All the smile came off his face. And he said, don't you understand for the first time, we're seen as we should be seen. You don't have a black role. You have an equal role." (via)

In 1967, Nichelle Nichols wanted to leave the series to return to Broadway but changed her mind after Martin Luther King's words to her. "You are our image of where we're going, you're 300 years from now, and that means that's where we are and it takes place now. Keep doing what you're doing, you are our inspiration." (via).


"When I turned around, I was looking into the face of Dr. Martin Luther King, walking toward me with a big smile on his face." "He said, 'Don't you realize how important your presence, your character is? This is not a black role or a female role. You have the first nonstereotypical role on television. You have broken ground.'" "He added, 'Here we are marching, and there you are projecting where we're going. You cannot leave [the show]. Don't you understand what you mean?' I told him that when I would go on hiatus from the show, I could come and march with him and he said, 'No! You're an image for us. We look on that screen and we know where we're going.' It was like he was saying, 'Free at last, free at last!'" (via) 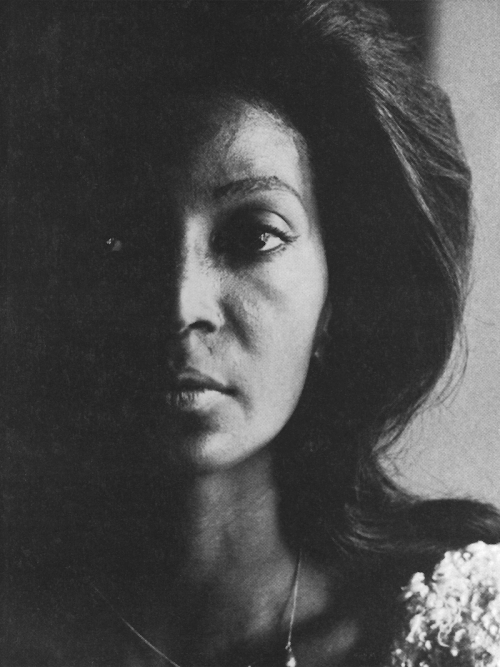 "When you look at the overall list of astronauts and mission specialists [recruited by Nichols], it's extremely diverse, and that improved the success of the whole program." (via) 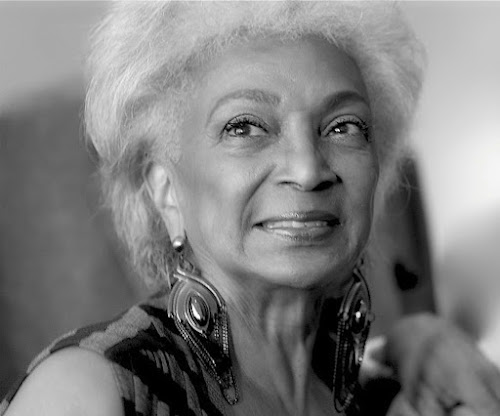 "It [Star Trek] not only changed the face of television, but it changed the way people thought of each other. It was a bigger contributor to uniting the races on this planet as anything." (via)