“Back then, as a teenager, I kept thinking, Why don't the adult around here just say something? Say it so they know we don't accept segregation? I knew then and I know now that, when it comes to justice, there is no easy way to get it. You can't sugarcoat it. You have to take a stand and say, 'This is not right'. And I did."
Claudette Colvin 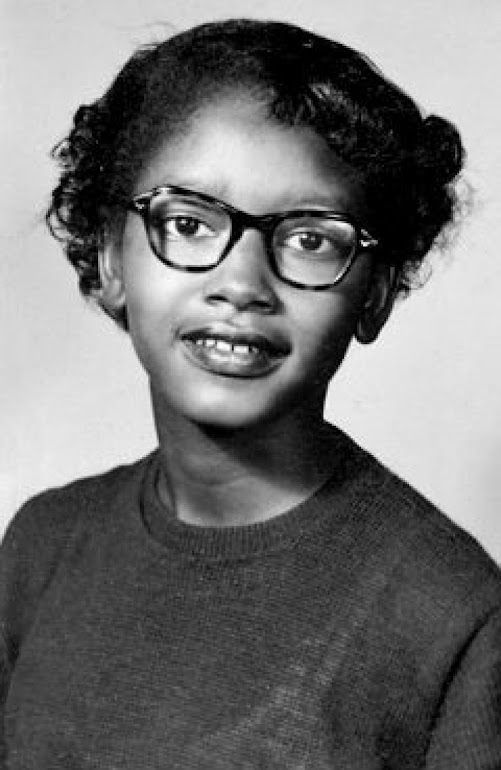 Claudette Colvin, born on 5 September 1939, refused to give up her bus seat to a white passenger while riding home on a city bus after school (that was having "Negro history month" studying black leaders like Harriet Tubman and Sojourner Truth) in March 1955 - nine months before Rosa Parks refused to do so. When the bus driver told her to give up her seat she replied:

Colvin was 15 years old when she stood up against segregation in Alabama; she was arrested for violating the city's segregation laws, was put in handcuffs by two police officers, was branded a troublemaker, had to drop out of college, could not find a job due to her reputation and served as one of four plaintiffs in the landmark legal case Browder v. Gayle that helped end segregation on Montgomery public buses.

"While Parks has been heralded as a civil rights heroine, the story of Claudette Colvin has received little notice."

The reason why Claudette Colvin never became the symbol Rosa Parks became was that the National Association for the Advancement of Colored People did not decide to use her case to challenge the segregation laws as a) she was very young and teenagers were not considered to be reliable, b) she was pregnant and an unwed mother would attract too much negative attention in a public legal battle and, according to Colvin, c) Rosa Parks's "skin texture was the kind that people associate with the middle class" (via and via). 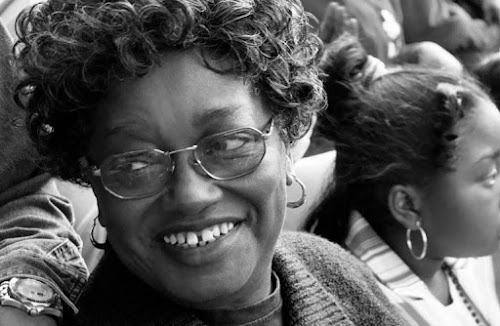 "All I remember is that I was not going to walk off the bus voluntarily."
Claudette Colvin

"I just couldn't move. History had me glued to the seat."
Claudette Colvin

"We couldn't try on clothes. You had to take a brown paper bag and draw a diagram of your foot ... and take it to the store. Can you imagine all of that in my mind? My head was just too full of black history, you know, the oppression that we went through. It felt like Sojourner Truth was on one side pushing me down, and Harriet Tubman was on the other side of me pushing me down. I couldn't get up."
Claudette Colvin 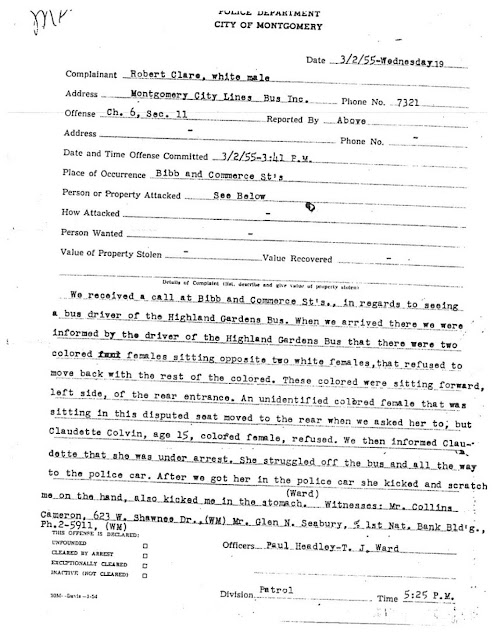 The following excerpts are taken from "Claudette Colvin: Twice Toward Justice", by Phillip Hoose via

CLAUDETTE: One of them said to the driver in a very angry tone, "Who is it?" The motorman pointed at me. I heard him say, "That's nothing new . . . I've had trouble with that 'thing' before." He called me a "thing." They came to me and stood over me and one said, "Aren't you going to get up?" I said, "No, sir." He shouted "Get up" again. I started crying, but I felt even more defiant. I kept saying over and over, in my high-pitched voice, "It's my constitutional right to sit here as much as that lady. I paid my dare, it's my constitutional right!" I knew I was talking back to a white policeman, but I had had enough.

One cop grabbed one of my hands and his partner grabbed the other and they pulled me straight up out of my seat. My books went flying everywhere. I went limp as a baby—I was too smart to fight back. They started dragging me backwards off the bus. One of them kicked me. I might have scratched one of them because I had long nails, but I sure didn't fight back. I kept screaming over and over, "It's my constitutional right!" I wasn't shouting anything profane—I never swore, not then, not ever. I was shouting out my rights.

It just killed me to leave the bus. I hated to give that white woman my seat when so many black people were standing. I was crying hard. The cops put me in the back of a police car and shut the door. They stood outside and talked to each other for a minute, and then one came back and told me to stick my hands out the open window. He handcuffed me and then pulled the door open and jumped in the backseat with me. I put my knees together and crossed my hands over my lap and started praying.

All ride long they swore at me and ridiculed me. They took turns trying to guess my bra size. They called me "nigger bitch" and cracked jokes about parts of my body. I recited the Lord's Prayer and the Twenty-third Psalm over and over in my head, trying to push back the fear. I assumed they were taking me to juvenile court because I was only fifteen. I was thinking, Now I'm gonna be picking cotton, since that's how they punished juveniles—they put you in a school out in the country where they made you do field work during the day.

But we were going in the wrong direction. They kept telling me I was going to Atmore, the women's penitentiary. Instead, we pulled up to the police station and they led me inside. More cops looked up when we came in and started calling me "Thing" and "Whore." They booked me and took my fingerprints.

Then they put me back in the car and drove me to the city jail—the adult jail. Someone led me straight to a cell without giving me any chance to make a phone call. He opened the door and told me to get inside. He shut it hard behind me and turned the key. The lock fell into place with a heavy sound. It was the worst sound I ever heard. It sounded final. It said I was trapped.

When he went away, I looked around me: three bare walls, a toilet, and a cot. Then I feel down on my knees in the middle of the cell and started crying again. I didn't know if anyone knew where I was or what had happened to me. I had no idea how long I would be there. I cried and I put my hands together and prayed like I had never prayed before. (...)

But I was afraid that night, too. I had stood up to a white bus driver and two white cops. I had challenged the bus law. There had been lynchings and cross burnings for that kind of thing. Wetumpka Highway that led out of Montgomery ran right past our house. It would have been easy for the Klan to come up the hill in the night. Dad sat up all night long with his shotgun. We all stayed up. The neighbors facing the highway kept watch. Probably nobody on King Hill slept that night.

But worried or not, I felt proud. I had stood up for our rights. I had done something a lot of adults hadn't done. On the ride home from jail, coming over the viaduct, Reverend Johnson had said something to me I'll never forget. He was an adult who everyone respected and his opinion meant a lot to me. "Claudette," he said, "I'm so proud of you. Everyone prays for freedom. We've all been praying and praying. But you're different—you want your answer the next morning. And I think you just brought the revolution to Montgomery.