"The student trained to reach decisions in the light of logic and of history will be disposed to recognize that, in a democratic country, governed as this is by the suffrage of its citizens, and given over as this is to the principle and practice of educating women, a distinction based on difference of sex is artificial and illogical.
This quote shows how I felt about the unfair treatment for women in psychology after I was denied a Ph.D from Harvard, even though I had met all of the requirements."
Mary Whiton Calkins 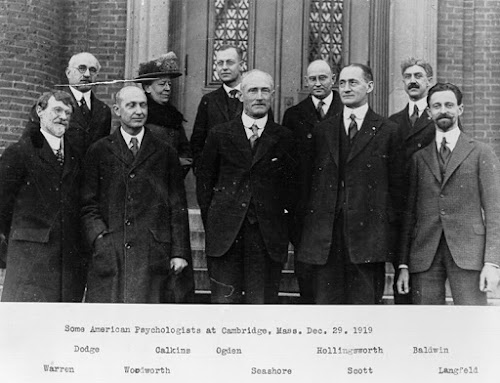 Mary Calkins was born on 30 March 1863 in Hartford, Connecticut. She attended the local elementary school and learned German in private lessons, attended Smith College, taught Greek at Wellesley College, a woman's college close to her family's home. She also instructed students in the fields of philosophy and psychology and was appointed to a newly created position in Wellesley's experimental psychology department although she had no training in psychology. Not being trained in psychology was not an obstacle, being a woman was. As at that time a great many schools did not admit women as students, she was hired only after petitions were made. Calkins furthered her education at Clark University for psychology and Harvard University for philosophy. Resistance continued: When she enrolled in William James's seminar, four men dropped it in protest, at Harvard she officially had the status of a guest since women could not register. James called her performance "the most brilliant examination for the Ph.D. that we have had at Harvard"; Calkins was denied the honour.


"Although she completed all of the requirements for the Ph.D., including passing exams, and though her Harvard professors recommended her for the degree, she was denied the honor simply because she was a woman."

Harvard's college for women, Radcliffe, offered her a degree which she turned down saying that she had done the work at Harvard. Mary Calkins is one of the first women to be offered the Ph.D.