Clyde Kennard was born on 12 June 1927 in Mississippi. He was a Korean War veteran and Civil Rights activist. In 1956, 1957 and 1959 (after the United States Supreme Court had ruled that segregation of public schools was unconstitutional in 1954), he attempted to enroll at the all-white Mississippi Southern College to complete his undergraduate degree. Each time he was rejected because he was black. 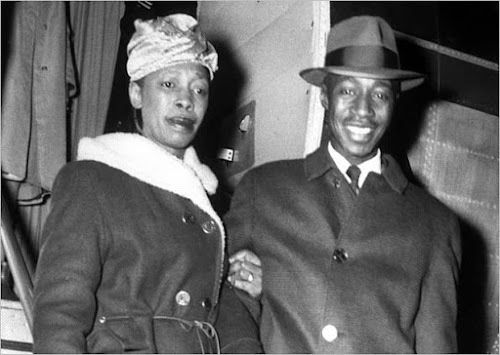 "Zack Van Landingham of the Mississippi State Sovereignty Commission, which ostensibly encouraged the state's public image but worked to suppress activists for civil rights, urged J. H. White, the African-American president of Mississippi Vocational College, to persuade Kennard to end his quest at Mississippi Southern College. When Kennard could not be dissuaded, Van Landingham and Dudley Connor, a Hattiesburg lawyer collaborated to suppress his activism. Files from the Sovereignty Commission, which the state opened for public review in 1998, showed that its officials went to the extreme of considering forcing Kennard into an accident or bombing his car to stop his quest. Instead, they framed him for a criminal offense." (via)

In 1959, Kennard was arrested, convicted and fined $600 for reckless driving and for illegal possession of alcohol, i.e. whiskey and other liquor that were planted under the seat of his car, as records show. His credit was cut off.
In 1960, he was arrested again. This time for the theft of $25 worth of chicken feed from a warhouse (a so-called accomplice testified against him who years later said that Kennard was innocent; despite efforts there was no pardon). Clyde Kennard was prosecuted and found guilty by an all-white jury that needed ten minutes to deliberate. He was sentenced to seven years in prison to be served in a high-security facility which made sure that he never again applied to any of Mississippi's all-white colleges.
In 1961, Kennard was diagnosed with cancer. Civil rights leaders fought for this release and Kennard could leave prison in 1963. Six months later he died (via and via).
Today, the Clyde Kennard Memorial Scholarship is named after him,

“What happened to me isn’t as bad as what happened to the guard [that abused him], because this system has turned him into a beast, and it will turn his children into beasts.”
Clyde Kennard in his last days in a Chicago hospital 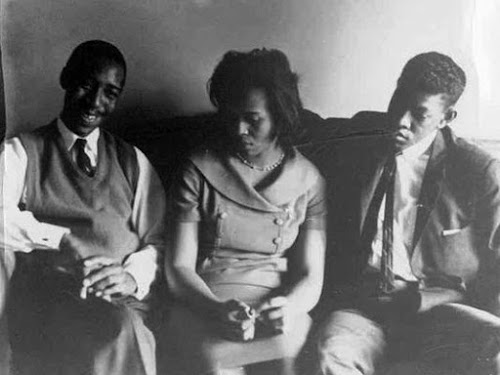 The charge that any person who believes in any form of integration of the races is a Communist or an out-side agitator has been made so constantly and with such force that it would not surprise me if there are some people who are innocent enough to believe, if not all, at least some portion of that charge. It is for the benefit of these unfortunate people that I review, briefly, the fundamental principle upon which the conviction of the integrationists is based.

Now this principle is an easy one for us to follow, for it holds as true in human history, especially American History, as it does in logic. Reason tells us that two things, different in location, different in constitution, different in origin, and different in purpose cannot possibly be equal. History has verified this conclusion. For nearly a century now the State of Mississippi has been under a supposedly separate but equal system. Let us ask ourselves, does the history of the system support the theory of the segregationists or the theory of the integrationists? What segregationist in his right mind would honestly claim that the facilities for the two races are equal? Still segregationists say, give us a little more time, we are really making progress. Perhaps they are making progress of some kind, but human life is not long enough to extend their time. They have had nearly a hundred years to prove their theory, and so far they are no closer to proof than when they began.

The differences which we now have over this matter of segregation versus integration have, unfortunately, been characterized by some as a mortal contest between out-side agitators and-or Communists, and peaceful, law-abiding citizens. This is furthest from the truth. The question is whether or not citizens of the same country, the same state, the same city, shall have equal opportunities to earn their living, to select the people who shall govern them, and raise and educate their children in a free democratic manner: or whether or not because of the accident of color, one half of the citizens shall be excluded from society as though they had leprosy?

If there is one quality of Americans which would set them apart from almost any other peoples, it is the history of their struggle for liberty and justice under the law. Lincoln has rightly said that this nation was conceived in liberty and dedicated to the proposition that all men are created equal. Truly, the history of America is inseparable from the ideals of John Locke, John Stuart Mill and Jean Rousseau. “We hold these truths to be self-evident, says our Declaration of Independence, that all men are created equal.” How different that statement is in spirit from the one which says: Before I see my child go to school with a Negro, I will destroy the whole school system. How different in virtue is the statement of Patrick Henry which says, “I know not what course others may take, but as for me give me liberty or give me death,” and the one which says, before I see a Negro with liberty I had rather see him dead.

The segregationists give as their reason for not allowing Negroes to participate more fully in the general community activities that ninety-five percent of the Negroes are not interested, which would leave only five percent of the Negroes are interested. Now, assuming that their statement is correct, and knowing that no person nor group of people in the United States has the right to forbid even one single person his constitutional rights, what accounts for their actions? Some declare that the northern states can permit integration because they have only a few Negroes, but the South can’t do that because the South has so many Negroes. Well, according to their own estimates, only five percent of the Negroes in the South are interested in the general community activities, and five percent of the Negroes in any community would certainly not weigh very heavily in any critical issue even if we were to assume that they would all vote the same way. On the other hand, if a majority of the Negro people in this State desires to participate to the fullest extent in the general community activities and are being forbidden to do so either through fear or ignorance, then the segregationists of this State are guilty of one of the strangest and probably the most tragic dictatorships yet recorded by history.

The big question seems to be, can we achieve this togetherness in our time? If the segregationists have their way we shall not. For instead of preaching brotherly love and cooperation they are declaring the superiority of one race and the inferiority of the other. Instead of trying to show people how much they are alike, they are busy showing them how much they differ. Instead of appointing a commission to study the problem to determine whether integration or segregation is the best policy for Mississippi at this time, they appointed a commission to try to maintain segregation at all cost whether it is the best policy or not the best policy.