"No matter how bad things are, at least ya aren't black."
Joan's mother

"My mother’s side of the family was your stereotypical Georgia redneck, that’s the only way I can put it, Pentecostal. I think that exposed me to a lot of the rural Deep South, hearing them express their attitudes and religious fervor. My father’s side of the family was more college-bred Iowa. My folks had met in Washington, D.C. during the Depression. Though my closest identification was with the Georgia branch, I also had this relationship with the other side of the family. My Iowa family cancelled out my Georgia family."
Joan Trumpauer Mulholland 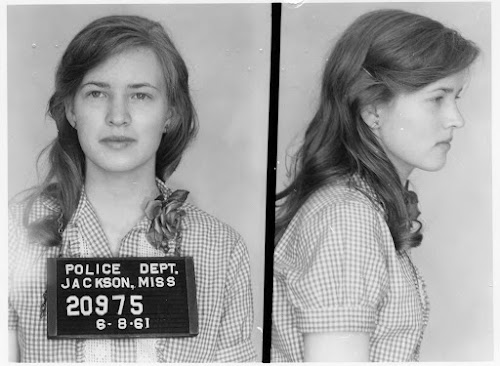 Joan Trumpauer Mulholland grew up with a racist mother but rebelled, took part in a civil rights protest at Duke University in 1960, then joined the Freedom Riders. In 1963, she took part in the sit-in at the segregated Woolworth lunch counter in Mississippi. She was arrested several times and disowned by her family (via), hunted down by the Klu Klux Klan and imprisoned on death row (via). When she spent two weeks in prison in Mississippi, prison ward Fred Jones wrote a letter to Joan's mother:


What I cannot understand is why as a mother you permitted a minor white girl to gang up with a bunch of negro bucks and white hoodlums to ramble over this country with the express purpose of violating the laws of certain states and attempting to incite acts of violence.
Fred Jones

Joan received letters, too. Here is one hate mail that was written to her:


Nothing you can do will integrate me. I do not choose to associate with black African slaves who were dragged here like animals + have remained almost the same. All we owe them is a return trip to Africa.
I M White

Joan was the first white student to enroll in the all-black Tougaloo College in Jackson where she met Medgar Wiley Evers (1925-1963), a civil rights activist who was killed by a white supremacist and Klansman (via). Joan Trumpauer Mulholland was active in the 1960s, took part in the Cherrydale Drug Fair counter in 1960, a protest that led to the desegregation of area drug stores, helped to integrate a college in Jackson (via) and is still active today. 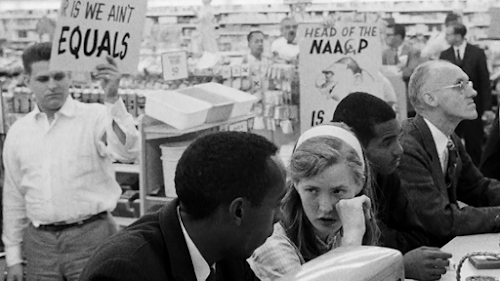 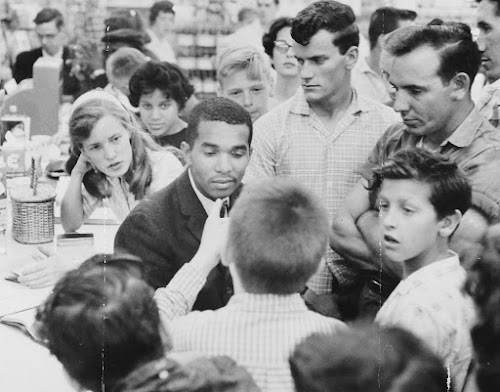 "When I was 10 years old and down at my grandma’s and my friend Mary and I dared each other to go into the Black area and the poverty there was so much worse than in the dirt poor White area. And then I saw the school – no paint, I remember – one outhouse and one pump or well – and such a contrast, I just knew that this was wrong and when I had the chance, to do something. I wanted to make the South the best that it could be for all of its people."
Joan Trumpauer Mullholland

"My great grandmother was a suffragette and chained herself to the Iowa State Capital Building. I grew up on these stories and I think that was part of me – it was in the DNA. My father had no sympathy for segregation but was a good government bureaucrat who believed you change the law at the top. My dad didn’t like the tactics but worried most that his first-born was going to be killed."
Joan Trumpauer Mulholland

"My involvement came about from my religious conviction, and the contradiction between life in America with what was being taught in Sunday school."
Joan Trumpauer Mulholland

"What we did in the ’60s changed the law, but not the inherent racism that made those laws. The Bible says we were all created in God’s image — nowhere is that image described as black or white, straight or gay."
Joan Trumpauer Mulholland