"The reason there are no intercollegiate sports for women at big universities, no scholarships, prize money, or any races longer than 800 meters is because women don’t have the opportunities to prove they want those things. If they could just take part, they’d feel the power and accomplishment and the situation would change. After what happened today, I felt responsible to create those opportunities. I felt elated, like I’d made a great discovery. In fact, I had."
Kathrine Switzer 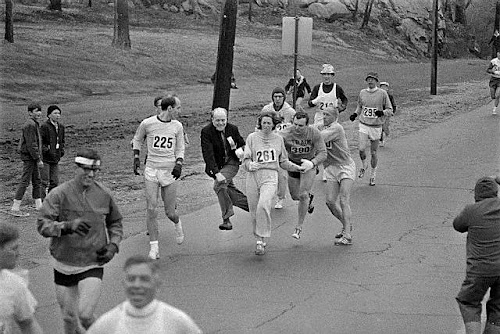 At university, Kathrine Switzer unofficially trained with the men's cross-country team as there was no women's running team. One night in 1966, she had an argument with her coach Arnie Briggs. Switzer: "Oh, let's quit talking about the Boston Marathon and run the damn thing." Briggs: "No woman can run the Boston Marathon." 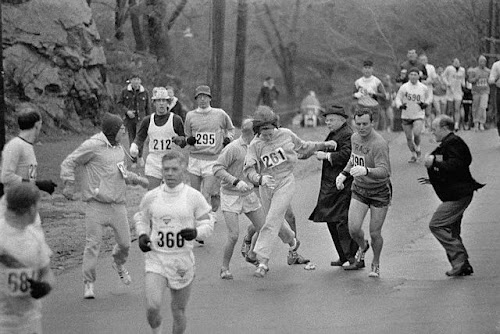 "If any woman could do it, you could, but you would have to prove it to me. If you ran the distance in practice, I'd be the first to take you to Boston." Briggs and Switzer ran a 31-mile trial, checked the rule book and entry form, did not find anything about gender and Switzer registered as "K.V. Switzer". Her boyfriend, Big Tom Miller, decided to run the marathon too because: "If a girl can run the marathon, I can run a marathon." 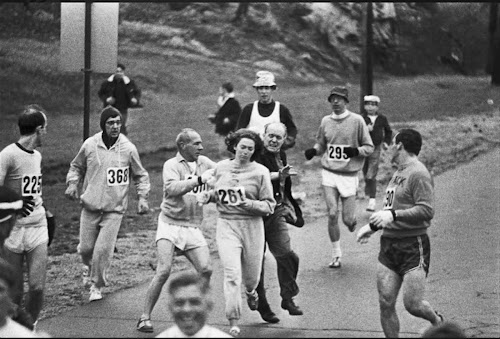 In Boston, Switzer felt welcome, other runners were pleased to have a woman in their presence: "Gosh, it's great to see a girl here!" As she was running, she saw a man from the Boston Athletic Association in the middle of the road shaking his finger at her and saying something. Shortly later, race manager Jock Semple grabbed her shoulder and screamed: "Get the hell out of my race and give me those numbers!" He tried to rip off her bib number, her coach tried to push him away, Kathrine Switzer tried to run (away) and her boyfriend finally hit him. Nevertheless, they continued running - feeling confused, helpless, terrified. Journalists changed the tone of their questions: "What are you trying to prove?" 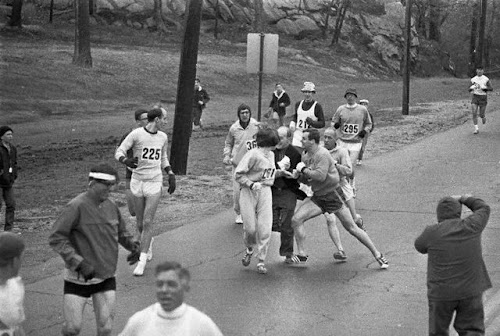 "(...) I wondered if I should step off the course. I did not want to mess up this prestigious race. But the thought was only a flicker. I knew if I quit, nobody would ever believe that women had the capability to run 26-plus miles. If I quit, everybody would say it was a publicity stunt. If I quit, it would set women’s sports back, way back, instead of forward. If I quit, I’d never run Boston. If I quit, Jock Semple and all those like him would win. My fear and humiliation turned to anger." (via) 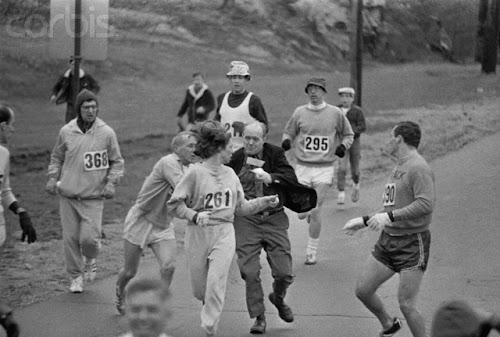 Women were not unwelcome in the 1960s if they only ran alongside the competitors for a while taking the role of enthusiastic spectators. As long as they were not official entrants and the "finishing line was not recorded, the woman runner posed not threat and encountered few problems." (Cooper, 1999). In 1966, Roberta Louise Gibb became the first woman to run the entire Boston Marathon - without a number and without an official time. In 1967, Kathrine Switzer ran with a number and finished the marathon despite the incidents. The Boston Marathon was established in 1897. Officially, women were not allowed to enter the Boston Marathon until 1972. In 1996, all unoffical women's leaders from 1966 to 1971 (when women were still believed to be physiologically unable to run marathon distances) were retroactively recognised. In 2011, 43% of the entrants were female and offical participants (via). 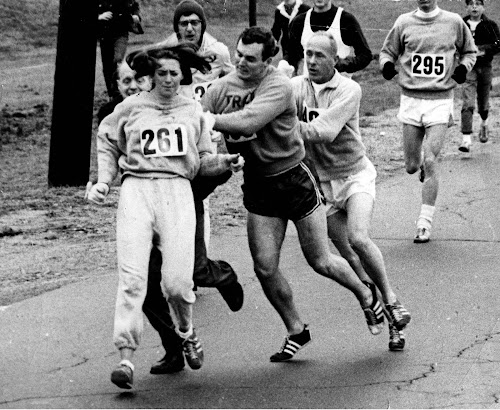 "I think it's time to change the rules. They are archaic. Women can run, and they can still be women and look like women. I think the AAU will begin to realize this and put in longer races for women ... I'm glad I ran - you know, equal rights and all."
Kathrine Switzer, 23 April 1967 (in Cooper, 1999)