Traffic lights, or rather traffic control systems in general, "are the most visible element of the urban infrastructure." They are systems that impose a strong social control over human behaviour by telling us when to stop and when to go. The first installation of a traffic light is said to have taken place in Cleveland in 1914. At the beginning, traffic lights were installed facing two directions with police officers controlling side street traffic. People did not believe that drivers or pedestrians would obey the signals of traffic lights without the presence of police (McShane, 1999). 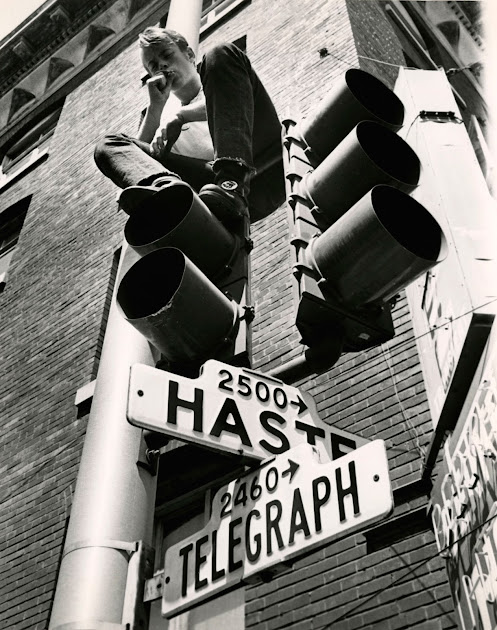 Before Germany's reunification, Eastern Germany used the so-called "Ampelmännchen" created by the traffic psychologist Karl Peglau, a traffic light pictogramme of a "squat figure with a jaunty wide-brimmed hat and one freakishly long arm" that clearly differed from the pictogramme used in the West. After reunification, EU-standards and attempts to harmonise the urban landscape by eliminating Ampelmännchen followed causing an outcry. The plan was cancelled, Ampelmännchen became a national icon and a discussion started whether the icon should be introduced across the EU.
In 2004, Zwickau, a German city in the East, introduced the "Ampelfrau" ("traffic light woman") with flared skirts and plaits. Since then, the Ampelfrau has spread across much of Eastern Germany and some of the Western parts. At the end of October 2014, two German parties announced the proposal to introduce a 50:50 gender balance in Dortmund's pedestrian traffic signals. In other words, "for every green man that flashes on to tell walkers it's time to cross, there will one day be a corresponding green woman doing the same elsewhere in the city."  With some delay, negative reactions followed - mainly in social networks. Arguments ranged from "Ampelfrau looks like Pippi Longstocking, an outdated cliché and a retrograde vision of femininity", "uniformity would be less distracting than using both Ampelmann and Ampelfrau" and "silly crosswalk couples" to "senseless, red-green world-improvement daydream" (red and green refer to the "corporate" colours the parties that proposed this step identify with).
The region around Berlin has introduced the female pictogramme withouth yet "causing deaths of pedestrians momentarily stunned by her striking silhouhette". On the contrary, the broader pictogramme emits a clearer and brighter light than the skinnier male version. In addition, the introduction of Ampelfrau would not cost extra money since only male stencils would be replaced that wear out (via). 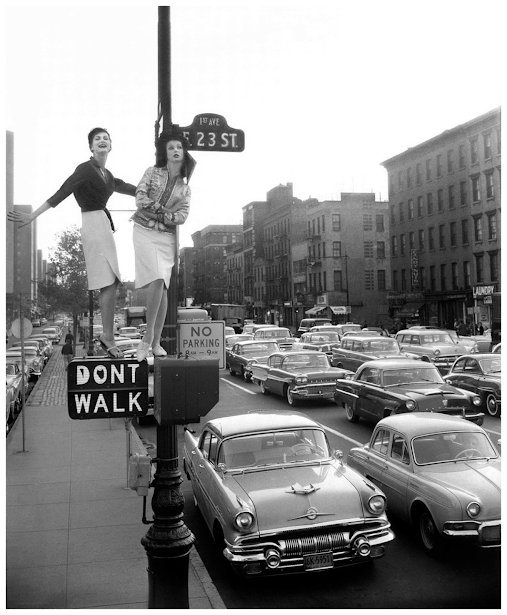 And now for something slightly different: The German cities of Oberhausen and Hildesheim have installed "ActiWait", a new generation of traffic light buttons that "convert boring waiting times into positive experiences". During red phases, touch screens offer the possibility to interact with pedestrians waiting on the other side of the street. The system was developed by two students who "want to reinvent the urban place by bringing back fun and personality" (via).
::: Playing "StreetPong": watch (in German but language is not really required to understand) 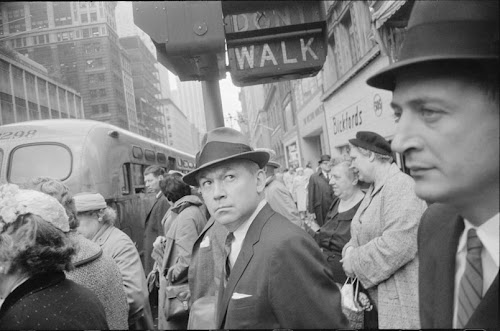 - McShane, C. (1999) The origins and globalization of traffic control signals. Journal of Urban History, 25(3), 379-404
- photograph of  young man smoking a cigarette and sitting on top of traffic light in Berkeley, 4 July 1968 via, Carmen Dell'Orefice and Betsy Pickeringpour by William Helburn for Harper's Bazaar 1958 via and photograph of New York c. 1962 via and via
Posted by M. Laura Moazedi