"Motoring is a pastime for women; young, middle-aged and – if there are any – old. There may be pleasure in being whirled around the country by your friends and relatives, or in a car driven by your chauffeur; but the real, the intense pleasure comes only when you drive you own car."

Elizabeth Levitt (5 January 1882 - 17 May 1922) was an early speedqueen, "a motorist who delighted in exceeding the speed limit", "a renowned pioneer of female independence, female motoring, motor racing, the most successful female competitor in Great Britain, victorious speedboat driver, holder of the water speed record, and holder of the Ladies World Land speed record." The "Champion Lady Motorist of the World" who taught Queen Alexandra and royal princesses to drive was described as "arguably the best known of the early drivers" at a time male prejudices against women drivers were rather clearly expressed. Dorothy Levitt continued countering clichés about "the ignorant woman": "I am constantly asked by some astonished people 'Do you really understand all the horrid machinery of a motor, and could you mend it if it broke down? ... the details of an engine may sound complicated and look 'horrid', but an engine is easily mastered." 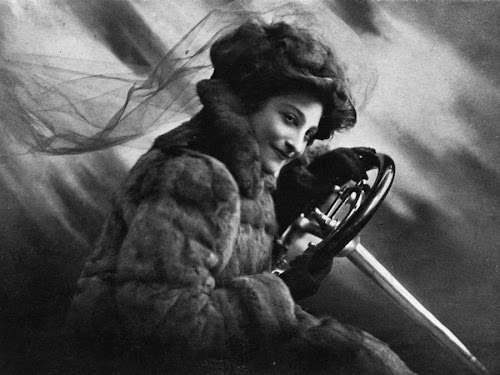 Levitt, the "Fastest Girl on Earth", published her book "The Woman and the Car: A chatty little handbook for all women who motor or who want to motor." in 1909. In her book she wrote that women should "carry a little hand-mirror in a convenient place when driving" and "hold the mirror aloft from time to time in order to see behind while driving in traffic".


"The mirror should be fairly large to be really useful and it is better to have one with a handle. Just before starting take the glass out of the little drawer and put it into the little flap pocket of the car. You will find it useful to have handy, not only for personal use, but to occasionally hold up to see what is behind you."

Dorothy Levitt invented the rear view mirror which was officially introduced by manufacturers in 1914. (via)


"First Englishwoman to take part in public motor-car competition. Did not win. Will do better next time."  Levitt's diary, 1903

"Broke my own record and created new world's record for women at Blackpool. Ninety horse-power six cylinder Napier. Racing car. Drove at rate of 91 miles an hour. Had near escape as front part of bonnet worked loose and, had I not pulled up in time, might have blown back and beheaded me. Was presented with a cup by the Blackpool Automobile Club and also a cup by S. F. Edge, Limited."  Levitt's diary, 1906