(Very) loose translation: This is to certify that Miss Ingeborg Syllm has written a doctoral thesis on the influence of adrenaline, pilocarpine, calcium, potassium, and barium on surviving guinea pigs' small intestine on the basis of a sample of healthy animals and those suffering from diphteria. I would have accepted her doctoral thesis if the laws on ancestry had not made it impossible for Miss Sylm to receive her doctorate.
Prof. Dr. R. Degkwitz, Head of University Children's Clinic Hamburg
30th of August 1938 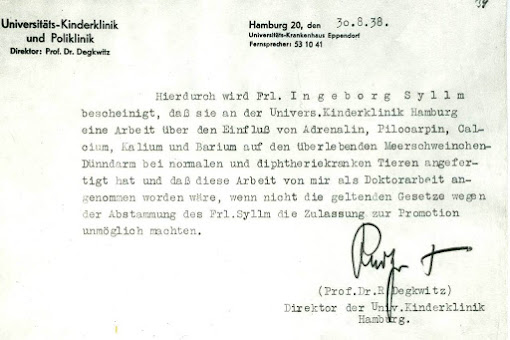 Ingeborg Rapoport was born on 2nd of September 1912 in Cameroon, at that time a German colony. Soon after she was born, her family moved to Hamburg - her father was Protestant, her mother Jewish. Ingeborg was raised as a Protestant which did not make things easier for her. She studied medicine and was a doctoral student in 1938 when she was not allowed to submit her doctoral thesis or to conduct a thesis defence. She was denied the doctorate degree. The same year, she left Germany for the US where she completed her studies, started working as a neonatalogist and became head of the paediatric department. Due to reactions to her "un-American" activities, i.e., handing out copies of the "Daily Worker" in disadvantaged neighbourhoods in Cincinnati, she moved back to Europe where she established the first clinic of neonatology in Berlin, at the Charité. Ingeborg Rapoport submitted her doctoral thesis in 1938 and could finally defend it before the University of Hamburg faculty committee in May 2015 - at the age of 102. An injustice righted after 77 years (via). Happy birthday, Ingeborg. 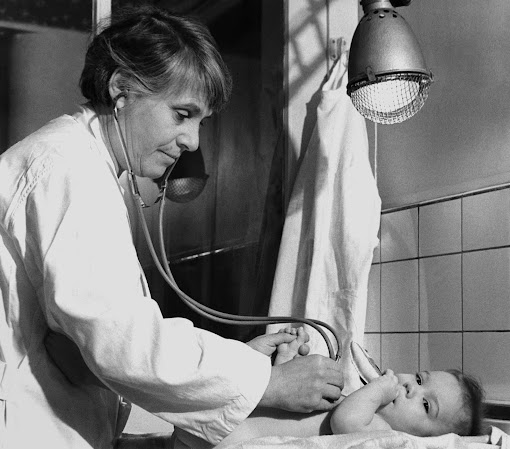 Her former professor Rudolf Degkwitz (1889-1973), Head of University Children's Clinic Hamburg, by the way, was suspended from work for six months for openly communicating a critical stance in the early 1930s. He continued criticising antisemitism, children's "euthanasia", the killing of people with disabilities and refused to make the Nazi salute. In 1944, he was sent to prison for seven years for criticising the regime but could escape in 1945. That year, that marked the official end of Nazi terror, he started working again as a head physician in a hospital and advocated "cleaning" the hospital from all the doctors that had actively supported Nazi Germany and were working there again. He did not succeed, was opposed, left Germany for the US and only returned to Germany shortly before his death (via).