Robert F. Kennedy's address in South Africa is considered as his greatest speech and was called "the most stirring and memorable address ever to come from a foreigner in South Africa". This "most important speech" was inspirational for a great many anti-Apartheid activists including Nelson Mandela who at that time was imprisoned. Kennedy delivered the speech at the University of Cape Town on 6 June 1966, the University's "Day of Reaffirmation of Academic and Human Freedom". South Africa was not amused. Forty news correspondents who were supposed to cover the event were denied visas, Kennedy was granted a visa after some hesitation (via). 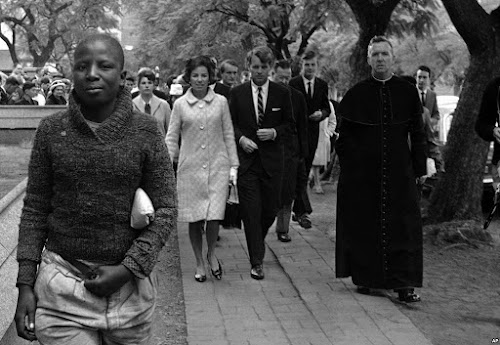 "I came here because of my deep interest and affection for a land settled by the Dutch in the mid-seventeenth century, then taken over by the British, and at last independent; a land in which the native inhabitants were at first subdued, but relations with whom remain a problem to this day; a land which defined itself on a hostile frontier; a land which has tamed rich natural resources through the energetic application of modern technology; a land which once imported slaves, and now must struggle to wipe out the last traces of that former bondage. I refer, of course, to the United States of America. (...)

For two centuries, my own country has struggled to overcome the self-imposed handicap of prejudice and discrimination based on nationality, social class, or race-discrimination profoundly repugnant to the theory and command of our Constitution. Even as my father grew up in Boston, signs told him that No Irish Need Apply. Two generations later President Kennedy became the first Catholic to head the nation; but how many men of ability had, before 1961, been denied the opportunity to contribute to the nation's progress because they were Catholic, or of Irish extraction? How many sons of Italian or Jewish or Polish parents slumbered in slums-untaught, unlearned, their potential lost forever to the nation and human race? Even today, what price will we pay before we have assured full opportunity to millions of Negro Americans? 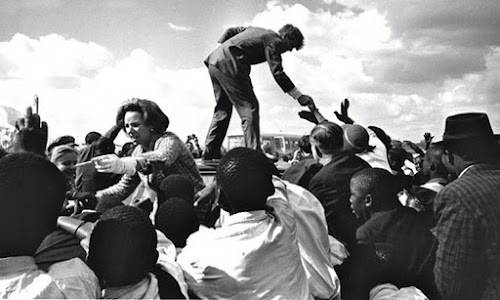 In the last five years we have done more to assure equality to our Negro citizens, and to help the deprived both white and black, than in the hundred years before. But much more remains to be done.

For there are millions of Negroes untrained for the simplest of jobs, and thousands every day denied their full equal rights under the law; and the violence of the disinherited, the insulted and injured, looms over the streets of Harlem and Watts and South Side Chicago.

But a Negro American trains as an astronaut, one of mankind's first explorers into outer space; another is the chief barrister of the United States government, and dozens sit on the benches of court; and another, Dr. Martin Luther King, is the second man of African descent to win the Nobel Peace Prize for his nonviolent efforts for social justice between races. We have passed laws prohibiting discrimination in education, in employment, in housing, but these laws alone cannot overcome the heritage of centuries-of broken families and stunted children, and poverty and degradation and pain.

So the road toward equality of freedom is not easy, and great cost and danger march alongside us. We are committed to peaceful and nonviolent change, and that is important for all to understand though all change is unsettling. Still, even in the turbulence of protest and struggle is greater hope for the future, as men learn to claim and achieve for themselves the rights formerly petitioned from others.

And most important of all, all the panoply of government power has been committed to the goal of equality before the law, as we are now committing ourselves to the achievement of equal opportunity in fact. 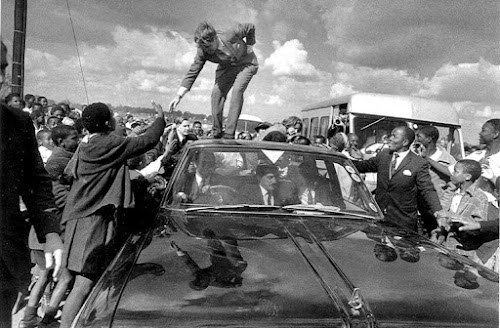 We must recognize the full human equality of all of our people before God, before the law, and in the councils of government. We must do this, not because it is economically advantageous, although it is; not because of the laws of God command it, although they do; not because people in other lands wish it so. We must do it for the single and fundamental reason that it is the right thing to do.

We recognize that there are problems and obstacles before the fulfillment of these ideals in the United States, as we recognize that other nations, in Latin America and Asia and Africa, have their own political, economic, and social problems, their unique barriers to the elimination of injustices.

In some, there is concern that change will submerge the rights of a minority, particularly where the minority is of a different race from the majority. We in the United States believe in the protection of minorities; we recognize the contributions they can make and the leadership they can provide; and we do not believe that any people -whether minority, majority, or individual human beings-are "expendable" in the cause of theory or policy. We recognize also that justice between men and nations is imperfect, and that humanity sometimes progresses slowly.

All do not develop in the same manner, or at the same pace. Nations, like men, often march to the beat of different drummers, and the precise solutions of the United States can neither be dictated nor transplanted to others. What is important is that all nations must march toward increasing freedom; toward justice for all; toward a society strong and flexible enough to meet the demands of all its own people, and a world of immense and dizzying change.

In a few hours, the plane that brought me to this country crossed over oceans and countries which have been a crucible of human history. In minutes we traced the migration of men over thousands of years; seconds, the briefest glimpse, and we passed battlefields on which millions of men once struggled and died. We could see no national boundaries, no vast gulfs or high walls dividing people from people; only nature and the works of man-homes and factories and farms-everywhere reflecting man's common effort to enrich his life.

Everywhere new technology and communications bring men and nations closer together, the concerns of one inevitably becoming the concerns of all. And our new closeness is stripping away the false masks, the illusion of difference which is at the root of injustice and hate and war. Only earthbound man still clings to the dark and poisoning superstition that his world is bounded by the nearest hill, his universe ended at river shore, his common humanity enclosed in the tight circle of those who share his town and views and the color of his skin.It is your job, the task of the young people of this world, to strip the last remnants of that ancient, cruel belief from the civilization of man. 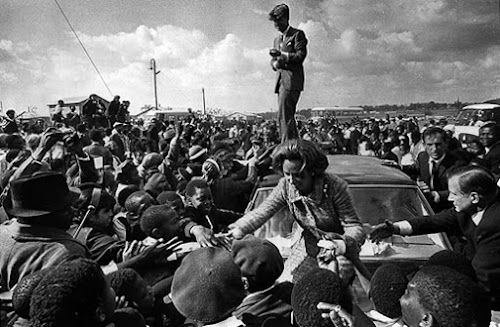 Each nation has different obstacles and different goals, shaped by the vagaries of historyand of experience. Yet as I talk to young people around the world I am impressed not by the diversity but by the closeness of their goals, their desires and their concerns and their hope for the future. There is discrimination in New York, the racial inequality of apartheid in South Africa, and serfdom in the mountains of Peru. People starve in the streets of India, a former Prime Minister is summarily executed in the Congo, intellectuals go to jail in Russia, and thousands are slaughtered in Indonesia; wealth is lavished on armaments everywhere in the world. These are differing evils; but they are the common works of man. They reflect the imperfections of human justice, the inadequacy of human compassion, the defectiveness of our sensibility toward the sufferings of our fellows; they mark the limit of our ability to use knowledge for the well-being of our fellow human beings throughout the world. And therefore they call upon common qualities of conscience and indignation, a shared determination to wipe away the unnecessary sufferings of our fellow human beings at home and around the world.

It is these qualities which make of youth today the only true international community. More than this I think that we could agree on what kind of a world we would all want to build. It would be a world of independent nations, moving toward international community, each of which protected and respected the basic human freedoms. It would be a world which demanded of each government that it accept its responsibility to insure social justice. It would be a world of constantly accelerating economic progress-not material welfare as an end in itself, but as a means to liberate the capacity of every human being to pursue his talents and to pursue his hopes. It would, in short, be a world that we would be proud to have built.

Just to the north of here are lands of challenge and opportunity-rich in natural resources, land and minerals and people. Yet they are also lands confronted by the greatest odds-overwhelming ignorance, internal tensions and strife, and great obstacles of climate and geography. Many of these nations, as colonies, were oppressed and exploited. Yet they have not estranged themselves from the broad traditions of the West; they are hoping and gambling their progress and stability on the chance that we will meet our responsibilities to help them overcome their poverty.

In the world we would like to build, South Africa could play an outstanding role in that effort. This is without question a preeminent repository of the wealth and knowledge and skill of the continent. Here are the greater part of Africa's research scientists and steel production, most of its reservoirs of coal and electric power. Many South Africans have made major contributions to African technical development and world science; the names of some are known wherever men seek to eliminate the ravages of tropical diseases and pestilence. In your faculties and councils, here in this very audience, are hundreds and thousands of men who could transform the lives of millions for all time to come.

But the help and the leadership of South Africa or the United States cannot be accepted if we-within our own countries or in our relations with others-deny individual integrity, human dignity, and the common humanity of man. If we would lead outside ourborders, if we would help those who need our assistance, if we would meet our responsibilities to mankind, we must first, all of us, demolish the borders which history has erected between men within our own nations-barriers of race and religion, social class and ignorance. (...)

Each time a man stands up for an ideal, or acts to improve the lot of others, or strikes out against injustice, he sends forth a tiny ripple of hope, and crossing each other from a million different centers of energy and daring those ripples build a current which can sweep down the mightiest walls of oppression and resistance. (...)"

::: Listen to the speech: LINK

"All religions have always hated females." Peter Greenaway photograph via 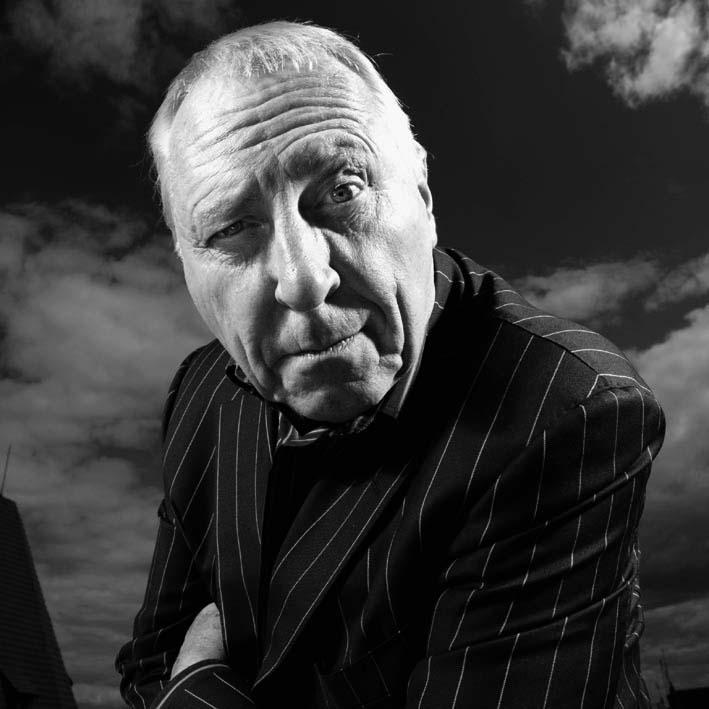