"She was a staunch freedom fighter."
Jesse Jackson

"She was the glue that held the movement together."
John Lewis

Coretta Scott King, the "First Lady of the Civil Rights Movement" was born on 27 April 1927. She met Martin Luther King, Jr. while in college; they married in 1953. After his death, she continued "to stand up with courage and ferocity for her husband's values", she "devoted the rest of her life to keeping alive the flame her husband had lit" and took on the leadership of the struggle for black US-Americans' equality, established Martin Luther King Day and the King Center, fought against apartheid and advocated women's rights and LGBT rights. The grandchild of slaves had been politically active long before meeting her husband, later worked side-by-side with him, then guarded his legacy. 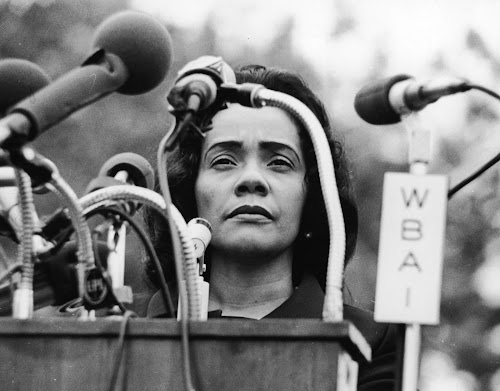 Coretta Scott grew up in a society that normalised racism and segregation, saw her parents' home being burned down and neighbours disappear whose bodies were found hanging from trees. She attended a one-room elementary school 8 km from her home and was later bused to Lincoln Normal School which was the closest black high school in Marion, Alabama and 14 km from her home. Shen then enrolled in Antioch College in Ohio and applied for the Interracial Scholarhip Fund for financial aid which was a means of Antioch to diversify the historically white campus. Her older sister Edythe already attended Antioch and had become the first black American to attend the school on a completely integrated basis. Coretta Scott studied music and "envisioned a career for herself in the music industry she knew would not be possible if she were to marry Martin Luther King". Her dream of  becoming a classical singer had to be given up - "giving up on her own ambitions would become symbolic of the actions of African-American women during the movement".


"Though such women have rarely been given voice, they were the staunch backbone of the civil rights movement. They raised funds as well as children, did the accounting as well as the housework, taught school and cooked meal. They kept the minutes at NAACP meetings, played organ at church, coordinated their husbands' schedules."  The New York Times 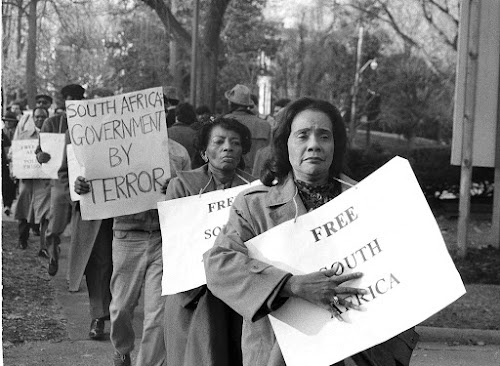 "On Thanksgiving Night, 1942, when I was fifteen years old, white racists burned our house to the ground." Coretta Scott King

"I think that... discrimination in the job market is a very important area where work needs to be done." Coretta Scott King

"In the area of economic justice, we still have a long way to go. We have too many people who are discriminated against just because they happen to be black or they happen to be a woman or some other minority." Coretta Scott King

"To abandon affirmative action is to say there is nothing more to be done about discrimination." Coretta Scott King

"I believe all Americans who believe in freedom, tolerance and human rights have a responsibility to oppose bigotry and prejudice based on sexual orientation." Coretta Scott King

"Wherever there was injustice, war, discrimination against women, gays and the disadvantaged, I did my best to show up and exert moral persuasion." Coretta Scott King

"Homophobia is like racism and anti-Semitism and other forms of bigotry in that it seeks to dehumanize a large group of people, to deny their humanity, their dignity and personhood." Coretta Scott King

"Gay and lesbian people have families, and their families should have legal protection, whether by marriage or civil union." Coretta Scott King

"A constitutional amendment banning same-sex marriage is a form of gay bashing and it would do nothing to protect traditional marriages." Coretta Scott King

"I don't see how you can separate human rights and the rights of all people, no matter what their sexual orientation is." Coretta Scott King

"The woman power of this nation can be the power which makes us whole and heals the rotten community, now so shattered by war and poverty and racism. I have great faith in the power of women who will dedicate themselves whole-heartedly to the task of remaking our society." Coretta Scott King