International Day for the Abolition of Slavery

"Slavery did not end with abolition in the 19th century."
Anti-Slavery International

"The focus of this day is on eradicating contemporary forms of slavery, such as trafficking in persons, sexual exploitation, the worst forms of child labour, forced marriage, and the forced recruitment of children for use in armed conflict."
United Nations 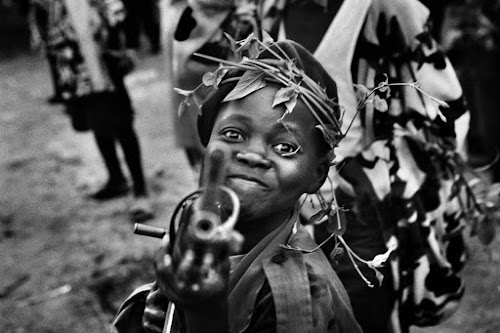 According to the International Labour Organisation, about 21 million men, women and children are in a form of slavery. These contemporary forms of slavery comprise forcing women into prostitution, forcing girls into marriage with older men and forcing children and adults to work for nothing (via). The use of children in armed conflicts is a lucrative contemporary manifestation of slavery. Recruiting children for participation in armed conflict or for sexual exploitation falls under the ambit of "trafficking in persons." Child soldiering interferes with a child's "fundamental right to education, health, and development" and is one of the worst forms of child labour. As if combats were not traumatic enough, the exploitation of child soldiers is usually accompanied by torture, sexual violence, sexual exploitation and sadistic treatment that desensitizes children to both the sight and commission of atrocities ... which finally may turn them into "killing machines" (Tiefenbrun, 2007). The reintegration of the children who had been subject to abuse in this highly pathological environment into civilian life is complex and difficult (via), but possible. From 2008 to 2009, Unicef helped to reintegrate more than 24.000 former child soldiers (via). In some countries, almost a third of the child soldiers are girls who additionally encounter forced pregnancy.


"Child soldiers serve within militaries and armed groups in which complete cooperation and obedience is demanded, in contexts where moral and legal safeguards against their abuse may have broken down. In this context sexual violence becomes sexual exploitation."

"Child soldiers are brainwashed thoroughly and brutally until their ethics and moral values become so distorted that they believe doing evil is good."

Child soldiering is a widespread phenomenon. During the civil war in Sierra Leone, for instance, about 25.000 children - some as young as six - were abducted and fored to join armed groups (Tiefenbrun, 2007). From 2009 to 2012, 18.000 children were forced to join guerrilla groups and paramilitaries in Colombia. While extreme poverty is the common denominator, indigenous Colombians are particularly vulnerable (via). Of the 31 countries where there were armed conflicts in 1998, 87% used child soldiers (via). It is estimated that there are currently 300.000 children in armed groups around the world. Many of them are child soldiers, others are "Children Associated with Armed Forces and Groups" who are used as cooks, spies, porters or "wives" for adult fighters (via). - Tiefenbrun, S. (2007). Child Soldiers, Slavery and the Trafficking of Children. Fordham International Law Journal, 31(2), 413-486.
- photographs (first one by Marcus Bleasdale) via and via
Posted by M. Laura Moazedi