Exposing the Cruelty and Injustice of Segregation: Bob Adelman

"He was in the belly of the beast, in the middle of what was going on. Whether it was civil rights or gay rights, Bob was there. He was amazing. How many individuals do you know who marched with Dr. Martin Luther King? He was a white Jewish photographer and he also photographed Malcolm X."
James Cavello 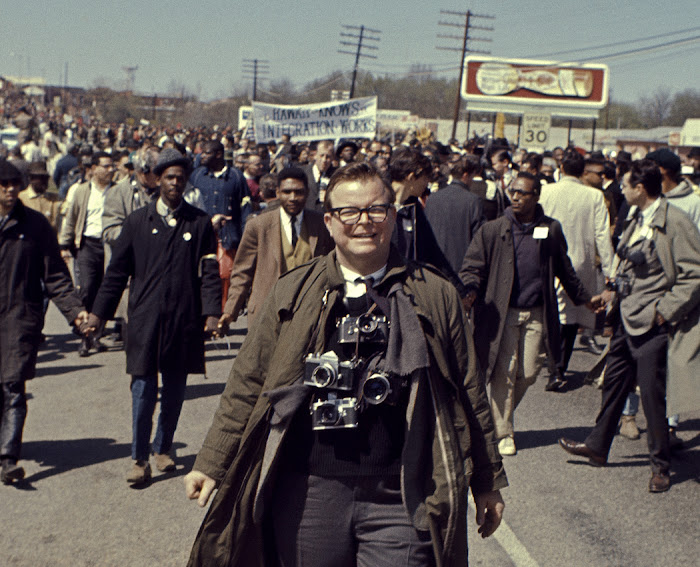 Adelman himself was white, yet his personal involvement with the Civil Rights Movement often makes his images seem more than just documentary. He had an ability to convey the humanity of his subjects, whether an unnamed demonstrator holding an “I Am a Man” signboard in Memphis in 1968 or Martin Luther King, Jr, delivering his 1963 “I Have a Dream” speech in Washington, DC.
Alison Meier

Adelman has moved beyond the familiar clichés of most documentary photography into that rare sphere wherein technical ability and social vision combine to create a work of art.
Ralph Ellison

Robert Melvin "Bob" Adelman (1930-2016) was the photographer known for chronicling the civil rights movement of the 1960s including the March on Washington for Jobs and Freedom (and of Martin Luther King giving his "I Have a Dream" speech) and the Selma to Montgomery March and. He was "drawn to the sit-ins staged by young students across the American South" and volunteered to take photographs for the Congress of Racial Equality when he was a young man. His involvement with civil rights issues continued for decades (via).


It was probably the greatest display of the people’s right to protest that I’ve ever participated in.
Bob Adelman on the Selma to Montgomery March

Adelman had access to Martin Luther King and other civil rights activists such as James Baldwin. His photographs were published in Life, Look, and the New York Times Sunday Magazine. Adelman was an atheist but felt that his covering the civil rights movement and exposing both the injustice and cruelty of segregation was his way of "doing the Lord's work" (via).


And of course the treatment of the demonstrators was very disturbing to me, and their courage was very moving. I was a political idealist, so I went on a Freedom Ride to Maryland and eventually I became the National photographer for CORE (Congress of Racial Equality) and I worked with SNCC (the Student Nonviolent Coordinating Committee) too. For me to get involved in something, I had to see some purpose in it. I realized that my involvement would be very dangerous, but I had a long think with myself, and decided that this was something worth risking your life for. The photographs were very important. They were used as evidence in court cases, they were used to raise money for the movement.
Bob Adelman

My life’s work, in addition to being about race relations, is about the many and diverse social concerns in the great tradition of American documentary photography: poverty, mental illness, alcoholism, inadequate housing, the immigrant experience, prostitution, delinquency, illiteracy and on and on.
Bob Adelman

When I photographed, I was intent on telling the truth as best I saw it and then to help in doing something about it. It was a constant effort not only to document in as honest a way as I could, and to make what I was seeing vivid, but to figure out how to change things.
Bob Adelman