“In the photograph, we see a white woman and a black man, apparently a couple, holding the product of their most unholy of unions: monkeys. In projecting what we will into this image - about miscegenation, our horror of difference, the forbidden nature of black men with white women - we see the beast that lies in us all.”
Hilton Als 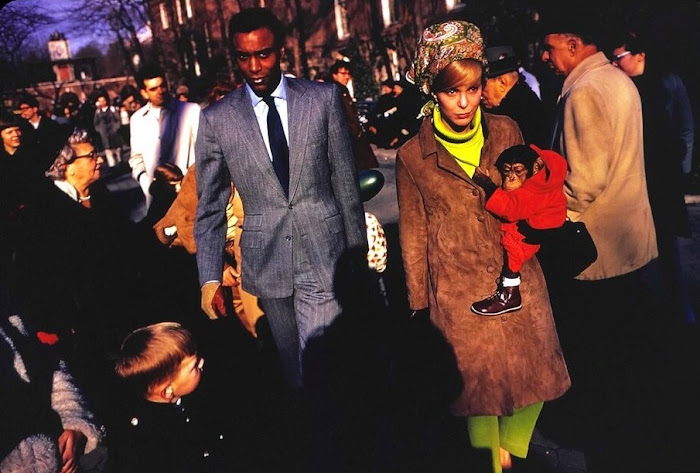 "I think part of the aim was to unsettle people's ideas, whether his own or other people's. To move people out of an unquestioning space and to some less settled space in which the authority of rules and structures was broken up a bit."
Eileen Hale, Garry Winogrand's widow 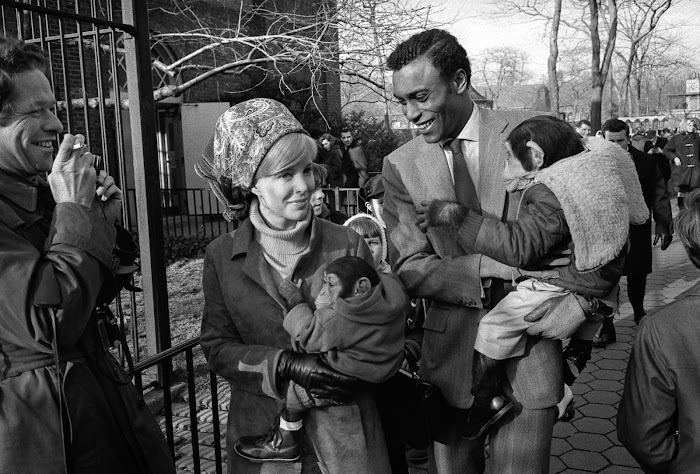 "(...) there is one photograph in “The Animals” that resonates more deeply than others. This picture shows, in medium close-up, a black man and a white woman. The man wears a jacket, a shirt and a tie. She is blonde and sports a head scarf. The man and the woman are each carrying a baby monkey. The monkeys, by implication, are the product of miscegenation: that is, born of parents who defied a natural law - the marriage of black to white - and whose only natural progeny could be… animals."
Hilton Als, The Animals and Their Keepers 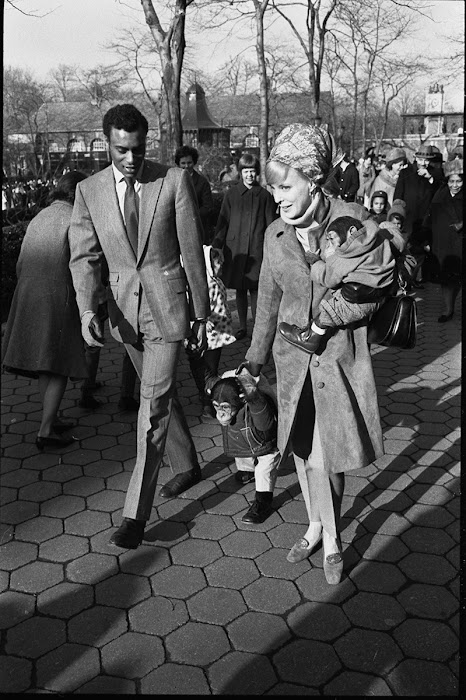 "(...) And so, one Sunday, on an early spring day about a year after we’d met, Garry and I found ourselves walking through the Central Park Zoo. I was 20 or 30 yards ahead of him when I noticed a handsome couple walking toward me—they looked like fashion models, in their 20s, both well-dressed—improbably walking with a pair of chimpanzees who were as immaculately attired as they were (the animals even wore shoes and socks). A New York City piece of strangeness, it seemed to me, strange enough to take a picture. So I did.
Then, bang!, I felt myself being pushed in the back away from this odd little group. A real shove, unfriendly, hard. And, of course, it was Garry, camera already up, making pictures, who’d done it. (...)
By now, both chimpanzees were off the ground (as my picture shows, one had been toddling between the couple when I first saw the group), and I finally noticed that the man in the little quartet was black, and the woman white and blonde. I’d already recorded that fact with my eyes, I’m sure, but what it may have meant, or could mean, in a photograph, was something I hadn’t had the time or the consciousness to process.
Garry Winogrand, however, had obviously processed the fact: where I saw only the possibility for a joke that, at best, touched on the crazy-quilt nature of city life, you could say that Garry, by not so much seeing the group itself but instantaneously imagining a possible photograph of it, placed meaning, particularly as it might gather around the question of race, at the very center of what he was doing.
In other words, quite apart from whatever Sunday pleasure or notion of self-advertising had actually brought that couple together with those two animals, Garry’s quick mind construed from their innocent adjacency a picture (or the projection of one) that could suggest the improbable price that the two races, black and white, might have to pay by mixing together. He was speculating, of course, playing an artistic hunch, but a large and important enough one that he felt it was worth pushing his friend aside for. So he did what he had to do, and then, a moment later, I answered by making a picture of him standing by the same family group as they continued their stroll through the zoo. (...)"
Tod Papageorge, 2014
- - - - - - - - -
- Papageorge, T. (2014). About a Photograph: New York, 1967, Garry Winogrand. Aesthetics of Theory in the Modern Era and Beyond, 2, via
- photographs by Garry Winogrand via and via and via
Posted by M. Laura Moazedi