"Not only has she combined a strong commitment to racial identity and equality with a mastery of poetic techniques, but she has also managed to bridge the gap between the academic poets of her generation in the 1940s and the young black militant writers of the 1960s."
George E. Kent on Gwendolyn Brooks 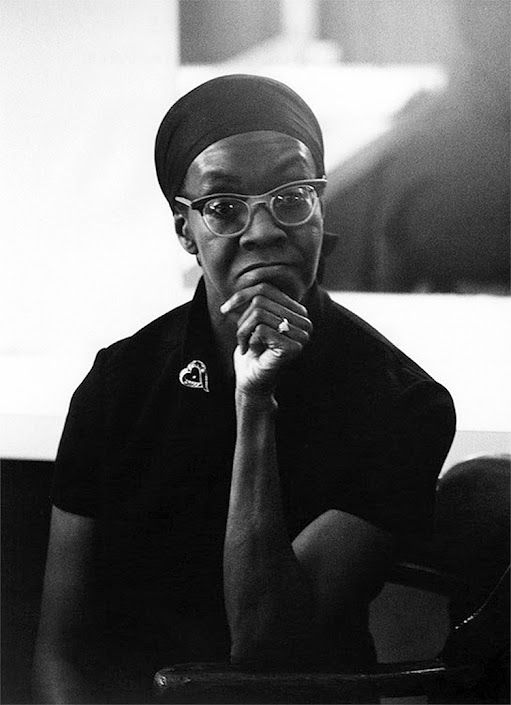 Gwendolyn Brooks (1917-2000) was the first black author to win the Pulitzer Prize for Poetry and the first black woman to hold the position of a poetry consultant to the Library of Congress. Her works included themes such as "the transformation of African American identity from denigrated to dignified, and the search for happiness despite the oppression of racism and poverty". By giving her characters a female voice, she described discrimination against black women in both a racist and sexist society (Ud Din, 2008).
Brooks' later works took a more political stance. And particularly during the 1960s, her poems reflected the civil rights activism of that time. In 1967, after a gathering of black writers at Fisk University, she noticed that the poets there were committed to "writing as blacks, about blacks, and for black audience". Her desire to nurture black literature made her leave the well-known publisher Harper & Row in favour of new black publishing companies - a decision she never regretted (via).

"I - who have 'gone the gamut' from an almost angry rejection of my dark skin by some of my brainwashed brothers and sisters to a surprised queenhood in the new Black sun—am qualified to enter at least the kindergarten of new consciousness now. New consciousness and trudge-toward-progress. I have hopes for myself. . . . I know now that I am essentially an essential African, in occupancy here because of an indeed 'peculiar' institution. . . . I know that Black fellow-feeling must be the Black man's encyclopedic Primer. I know that the Black-and-white integration concept, which in the mind of some beaming early saint was a dainty spinning dream, has wound down to farce . . . I know that the Black emphasis must be not against white but FOR Black. . . . In the Conference-That-Counts, whose date may be 1980 or 2080 (woe betide the Fabric of Man if it is 2080), there will be no looking up nor looking down."
Gwendolyn Brooks

- Ud Din, K. (2008). Mother Utters: Struggle and Subversion in the Works of Gwendolyn Brooks. Pennsylvania: Dissertation
- photographs via and via