He, She, God, and the Church of England

"Orthodox theology says all human beings are made in the image of God, that God does not have a gender. He encompasses gender – he is both male and female and beyond male and female. So when we only speak of God in the male form, that’s actually giving us a deficient understanding of who God is.”
Rev Jody Stowell 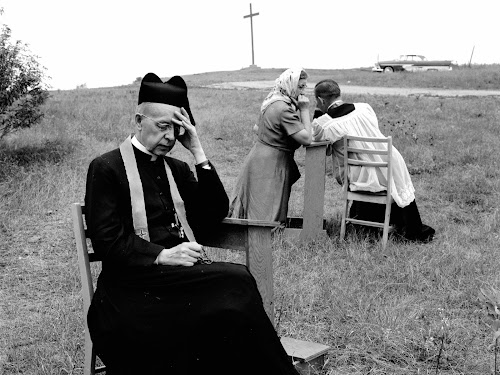 "Women and the Church" is a group within the Church of England that advocates for female bishops (Right Reverend Libby Lane was consecrated as the first female bishop last January, two more followed in March) and now recommends that church liturgy refers to God as both "He" and "She" since exclusively using "He" instead of a "more expansive language and imagery" would give worshippers a "deficient understanding" (via) and suggest that men are closer to God (via). The debate is not a completely new one in the church, the shift to gender-equal language has made clear progress in some sections of the church where "[q]uietly clergy are just talking about God as 'she' every now and then.'" Rev Jody Stowell explains that it is not an attempt to make God a woman but to create "proper, Biblical images of God" (via).


“It’s just the church moves slowly. [The debate] caught the imagination now because we’ve got women bishops so in a sense the church has accepted that women are equally valued in God’s sight and can represent God at all levels. We want to encourage people to be freer, and we want to get the Liturgical Commission to understand that people are actually quite open to this and there is room for richer language to be used.” Rev Emma Percy 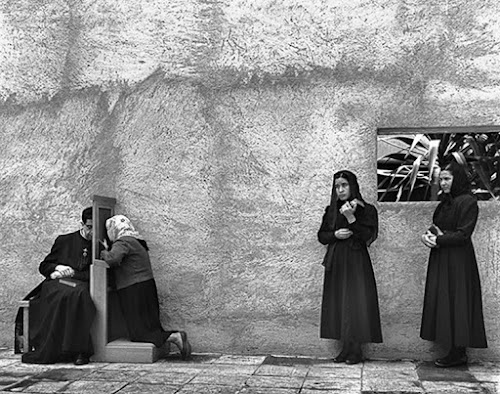 “In the last two or three years we’ve seen a real resurgence and interest in feminism, and younger people are much more interested in how gender categories shouldn’t be about stereotypes. We need to have a language about God that shows God can be expressed in lots of diverse terms.”
Rev Emma Percy

"Will it make a difference having women serve as bishops?
Only if it means more women in the church are more confident to challenge the kindly benign paternalism that continues to keep us quiet, and without having to soothe the ruffled feelings of those, mainly men, whom we challenge.
Only if God is she as often as she is he – because this is such a formative aspect of our church life, and a real bastion of sexism.
Only if laywomen are better enabled by our church life to live more godly lives – everyday lives – not usually by being ordained or by helping the vicar, but in our calling to be a role model for girls of thoughtful leadership wherever that may be: as generous administrators, as alert police officers, as really skillful engineers, as vigorous MPs, as campaigners on homelessness, climate change and modern slavery. Our religious institutions need to affirm and encourage us all in our work as women of faith in a God-filled and God-unnoticing country.
I hope our three women bishops, with more to come, I trust, will carry some of these yearnings with them."
Hilary Cotton (Chair of Women and the Church)

"We have images of God as a mother bear, so very ferocious, protecting her cubs. We have God as a woman baking and kneading the bread, so this forming God. We have God as a nursing mother. We're not restricted to understanding God with one gender. I would encourage people to explore those kinds of images. They're wholly Biblical. They're wholly traditional within the Christian faith."
Rev Jody Stowell

"Most people think of God as a bearded man in the sky... probably white himself. This is not just a gender discussion. I think if [young people] are seeing people saying that God is not an old, white man in the sky and that God is inclusive of everybody, then that will interest people, especially if they've got the idea that Christianity is male, pale and stale. If we're debunking that myth... of course that's going to bring people to explore faith more."
Rev Jody Stowell 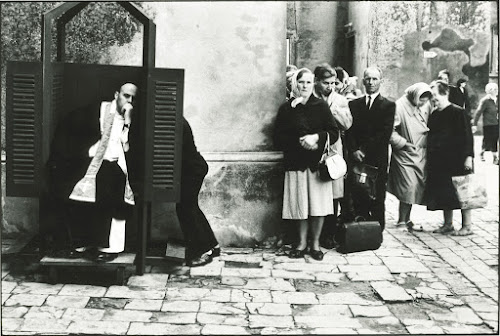 photograph, circa 1955: Jesuit priests hear confessions at the Martyr's Shrine, near Midland, Ontario. The shrine is dedicated to the first Jesuit missionaries who arrived in 1626 in the Huron country to convert the Iriquois. (Photo by Berni Schoenfield/Three Lions/Getty Images) via and by John Gutmann (The Confessional, Mexico, 1960) via and by Eliott Erwitt (Czestochowa, Poland, 1964) via
Posted by M. Laura Moazedi