"It took balls for these guys to hire me in this capacity. It’s a bold choice, and an appropriate one for 400 years in the future."
Kate Mulgrew

"I'm not even remotely surprised at how much attention the fact that the show had a female captain attracted. This is the human condition. It's novelty."
Kate Mulgrew cited in Altman & Gross (2016) 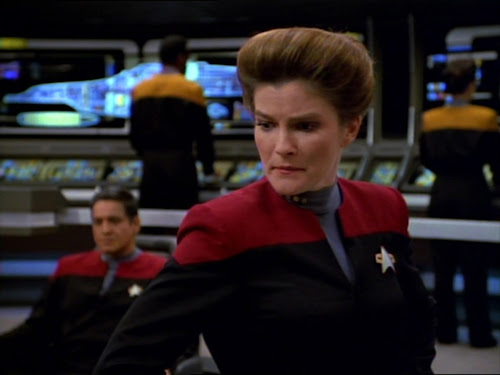 The decision to have a female captain was "a landmark moment" (Knight, 2010) and one the creators never made a grand point about. There was a female captain. Naturally (via). Because it "seemed like the logical thing to do" (via).


"I told them, ‘I want to do this with a woman,’ and they were very supportive. They just said, ‘Let’s not close the door to men. Look at men as well.’ But being opposed to hiring a woman — that’s nonsense. They just weren’t 100 percent sure we would find the right woman." Rick Berman

Captain Kathryn Janeway was strong-willed, fearless, strong. In terms of behaviour, she was a second-wave feminist's ideal power woman: equal of any man. Janeway was dressed in the Star Fleet unisex uniform that conceiled her feminine figure (Knight, 2010). Kate Mulgrew, in fact, refused to sexualise Captain Janeway (via). The solution to this "problem" was to bring in a "physically overdeveloped" cyborg in a catsuit ("Seven of Nine" played by Jeri Ryan) who "took the pressure off the Captain to satisfy the sexual voyeurism of which male science fiction audiences were widely suspected" (Relke, 2006). The cyborg's purpose was "to cater to the snickering demographic of young male viewers and it worked" (Garcia & Phillips, 2009). It may be added that Seven of Nine replaced Kes, a character that was surely not the most exciting one, that the scripts were popular, that the cyborg was intelligent and had a sense of humour and that her interaction with other crew members was at times rather amusing. These facts could have contributed to the success - there is hope it was not the catsuit alone.


"That moment stands out for me when Jeri Ryan arrived. That was an interesting moment because – there’s been a lot of controversy about it generated by me – again unfortunate.""When you’re the first female captain you hope against hope that that’s going to be sufficient until the day it wasn’t.""I said, ‘I’m not going to sleep with Chakotay, it’s not going to happen. I said you’re just going to have to go somewhere else for it, so they got this very beautiful girl to come in. She played a wonderful character. And yes, I was unsettled by it because I had hoped – as I’m sure Hillary Clinton hoped. We all hope." Kate Mulgrew 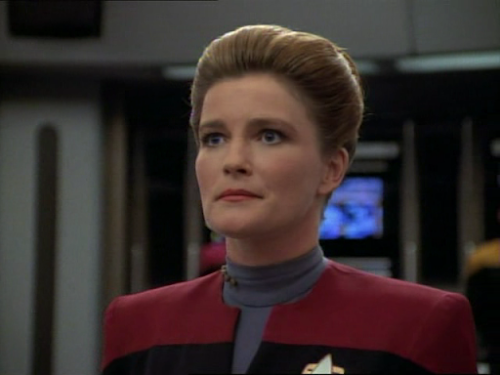 Before Kate Mulgrew, there was Geneviève Bujold. Bujold was supposed to play Captain Janeway in Voyager but left after three days because she could not adjust to the work schedule TV series have (via). Kate Mulgrew was the next choice:


"Something in me rose up at the very thought that after Miss Bujold defected, that I would fail and then they would bring back another man. I thought, ‘No, no, no we can’t have this. We simply cannot, we must go forward.’ And so we did. And guess who had me to the White House after the end of the first season? A woman by the name of Hillary Clinton." Kate Mulgrew 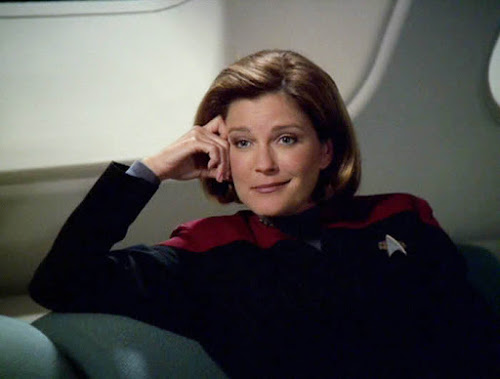 "The beauty of ‘Star Trek’ is that Roddenberry was very far-seeing. Gender regarding the Captain’s seat was a unilateral thing. It transcended all of those classifications. I think that I played Janeway as I would play her today."
Kate Mulgrew

"I watched this with great curiosity because I love to see how men deal with their deepest anxieties ... about will this franchise succeed or will it not, with this woman at the helm.... They changed it (her hairstyle) five times in the first season, two, three times in the second. You know, my message to Patrick Stewart is, 'You lucky devil.' I mean, it was just constantly a source of anxiety for them, and of course it had nothing to do with the reality."
Kate Mulgrew, cited in Relke (2006)

"I played Captain Janeway in the era that had not resolved the conflicts surrounding mothers and work.
It’s slow-going. I’m not gonna be foolish about it. It’s still a boy’s club. But this must change, out of necessity."
Kate Mulgrew

"A female captain has a lot of leeway that a male captain wouldn’t have."
"Women have an emotional accessibility that our culture not only accepts but embraces. We have a tactility, a compassion, a maternity-and all these things can be revealed within the character of a very authoritative person."
Kate Mulgrew

"Kate has a lot of pressure on her. There’s really no precedent for her situation. Except maybe Joan of Arc. And she had the anointing of God."
Robert Beltran (Chakotay)