"I saw that the camera could be a weapon against poverty, against racism, against all sorts of social wrongs. I knew at that point I had to have a camera."
Gordon Parks

"I suffered first as a child from discrimination, poverty ... so I think it was a natural follow from that that I should use my camera to speak for people who are unable to speak for themselves."
Gordon Parks 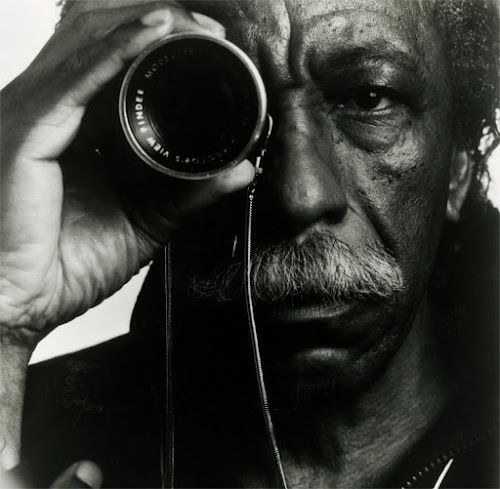 "I suffered evils, but without allowing them to rob me of the freedom to expand."
Gordon Parks

"I was up in New York state someplace and I went to a hotel, bitterly cold, twenty below zero or something like that. The guy refused me a room, just wouldn't talk with me and a young white boy came in with a mackinaw on and a guitar in his arm. He was standing behind me so the guy says, "Well, what do you want?" and he says, "Well, I'm after this man." And the hotel man said, "Well, we don't allow Negroes or Jews in this hotel, the management doesn't." And the other boys says, "Oh, if it's not good enough for him, it's not good enough for me." And he turned and walked back out in the cold. Well, he never stopped to apologize to me for this man, for his race or anything of this sort. It was the only hotel in town and I figured he must have gone somewhere but I thought the act was something I could never forget and I think I appreciated it even more because he didn't stop to talk. He showed me he believed in what he . . . he didn't want to quarrel about it and off he went back into the cold and that was something that you don't forget, a thing like this. I often would like to have known who this guy was. A lot of people say that they thought maybe it was Pete Seeger, but I didn't know him but he was tall and he had a guitar under his arm. Anyhow, I just don't want to know who he was; to me he's better unknown. You know?"
Gordon Parks 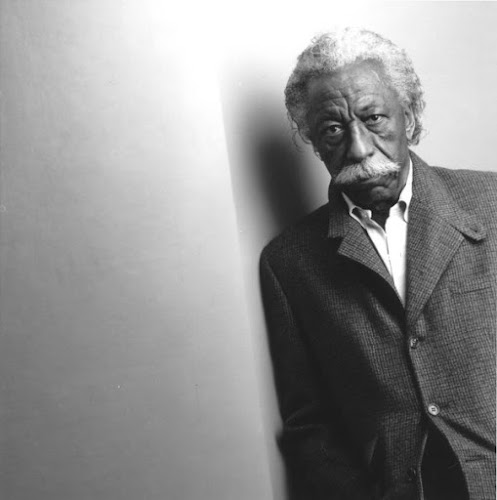 "Washington, D.C. in 1942 was not the easiest place in the world for a Negro to get along."
Gordon Parks

"Having just come from Minnesota and Chicago, especially Minnesota, things aren't segregated in any sense and very rarely in Chicago, in places at least where I could afford to go, you see. But suddenly you were down to the level of the drugstores on the corner; I used to take my son for a hotdog or malted milk and suddenly they're saying, "We don't serve Negroes," "niggers" in some sections and "You can't go to a picture show." Or "No use stopping, for we can't sell you a coat." Not refusing but not selling me one; circumventing the whole thing, you see? And Roy more or less expected all this, because he could see that I was green as a pea when I came to Washington and not too involved in all this as I might have been, in humanity. So he said, "Go out and see these things, the people, eat here, go to a theatre, go to the department store and buy yourself a coat. You need a coat." And I came back roaring mad and I wanted my camera and he said, "For what?" and I said I wanted to expose some of this corruption down here, this discrimination. And he says, "How you gonna do it?" "Well, with my camera." So he says, "Well, you sit down and write me a little paper on how you intend to do this," and I said, "Fine." I sat down, wrote several papers, brought them in. He kept after me until he got me down to one simple little project. That was my first lesson in how to approach a subject, that you didn't have to go blaring in with all horns blasting away, but I did a picture there that he often laughed at because of, I suppose, of what I thought was the shock appeal of it."
Gordon Parks

"I think maybe the rural influence in my life helped me in a sense, of knowing how to get close to people and talk to them and get my work done. That might have helped some. I think Roy stirred the interest in me to try and get to know people and get to know all kinds of people better and investigate their ills and their prejudices and their goods and their evil. It was just like a research into the mind of the one you met and in that way I'm sure you felt that you'd grow in a sense and that sometime would be doing some sort of service by recording as much of it as you could with a camera. I don't know that I was any better equipped. I probably . . . in some instances I was, more than probably the white photographers because of an emotional something that probably I was closer to or akin to which has certainly been in my favor since. Some of those Negro stories that I've done for Life and Standard Oil and other places have dealt with poverty, dealt with the emotional aspect of everyday living, because my own life was packed, early life, was packed with so much of it."
Gordon Parks

"I don't say that, you know, I was any more sensitive than the rest of the photographers on the FSA, but I certainly had other areas of my own personal problems in rejection and discrimination than any of them did, because I was a Negro and Roy I think taught me to use that disadvantage in an intelligent way instead of striking back with violence any longer, and so I put it into the camera. Meanwhile, I suppose meeting all these people and taught me a lot about human beings that I didn't know, inasmuch as when I came to Washington, I practically hated every white face that I saw because of what happened to me. But as I . . . as he showed me around and exposed me to more and more people, I came to realize that, for really the first time in my life, that we must accept people as individuals and it was a great lesson Roy taught me. He charged me with bitterness at first, showed me both sides of the coin, and then let me take my own choice you know and hoping I'm sure that he had over-exposed me to the best part of it. And felt, I suppose, that if I didn't work out all right then he'd done as much as he could have done toward . . . . I think I was sort of a noble experiment for Roy."
Gordon Parks

"I picked up a camera because it was my choice of weapons against what I hated most about the universe: racism, intolerance, poverty. I could have just as easily picked up a knife or a gun, like many of my childhood friends did... most of whom were murdered or put in prison... but I chose not to go that way. I felt that I could somehow subdue these evils by doing something beautiful that people recognize me by, and thus make a whole different life for myself, which has proved to be so."
Gordon Parks

"The camera could be a very powerful instrument against discrimination, against poverty, against racism."
Gordon Parks

(...) and certainly it wasn't popular for any magazine including Life or anyone else to hire a Negro in those days and I never was given Negro assignments as such. I was given regular assignments like everyone else and I think everyone respected this training and background."
Gordon Parks

"But I was very disappointed that I didn't get a chance to go overseas with that group, might not have gotten back but I wanted very much to go because there's not much of a record of the exploits of the first Negro fighter group."
Gordon Parks

"So I went to Chicago in 1940, I think, '41, and the photographs that I made there, aside from fashion, were things that I was trying to express in a social conscious way. I'd become sort of involved in things that were happening to people. No matter what color they be, whether they be Indians, or Negroes, the poor white person or anyone who was I thought more or less getting a bad shake."
Gordon Parks

"I've been asked if I think there will ever come a time when all people come together. I would like to think there will. All we can do is hope and dream and work toward that end. And that's what I've tried to do all my life."
Gordon Parks