Phyllis Schlafly (1924-2016) - one husband, six children, sixteen grandchildren - founded the STOP (Stop Taking Our Privileges) ERA (Equal Rights Amendment) campaign after Congress passed the amendment in 1972 aiming to protect so-called family values and women since the ERA would deprive them of the special privileges.

When you make the laws apply equally to men and women, you end up taking away many of the rights that women now have.
Phyllis Schlafly 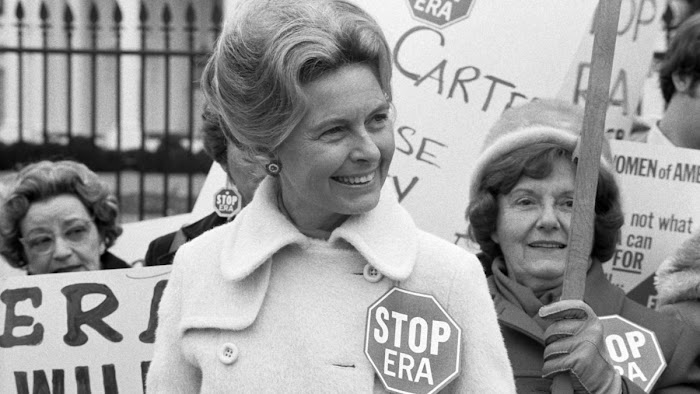 Schlafly's campaign fought until the final ERA deadline in 1982 and Schlafly continued expressing her stance throughout her life opposing the "radical feminist movement" that was reversing gender roles, forcing women to abandon their traditional roles, encouraging same-sex marriages, unisex bathrooms, women in combat, and taxpayer-funded abortions, threatening families, and the dignity of women's role of homemakers, forcing them to join the paid workforce, eliminating Social Security benefits for widows and homemakers, abolish child support and alimony laws (via and via).
From a pamphlet:
“ERA will invalidate all state laws which require a husband to support his wife. ERA will impose on women the equal (50%) financial obligation to support their spouses (under criminal penalties, just like husbands). ERA will impose on mothers the equal (50%) financial obligation for the financial support of their infant and minor children. ERA will deprive senior women, who have spent many years in the home as wife and mother, of their present right to be supported by their husbands and to be provided with a home.”“ERA will make women subject to the draft on an equal basis with men in all our future wars. ERA will make women and mothers subject to military combat and warship duty.”“ERA will deprive women in industry of their legal protections against being involuntarily assigned to heavy-lifting, strenuous, and dangerous men’s jobs, and compulsory overtime.”“ERA is a fraud. It pretends to improve the status of women but actually is a big takeaway of the rights women now possess.”
Interestingly, ...

Schlafly’s opposition to the ERA was unique for its aggressive disdain for feminism and its political savvy. But it revealed an older tension that gripped women’s organizing since the late 19th century. Before and after the passage of the 19th Amendment, many feminists wondered if legally mandated equality actually served poor and working-class women since these measures could potentially undo hard-fought protections that acknowledged women’s disadvantaged position in the workplace and the home. (Wiesner & Mellon, 2020)