"Being a woman influenced my ideas about what I wanted to photograph. My interest in women’s issues, in family issues, in social relationships came out of my experience of growing up as a female."
Abigail Heyman 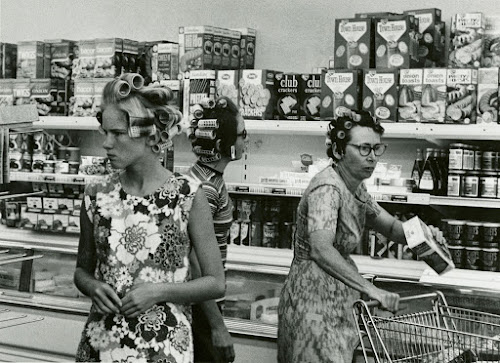 Abigail Heyman (1942-2013), US-American feminist, photojournalist, and one of the first women to be invited to join Magnum Photos. She was known for her book "Growing Up Female: A Personal Photo-Journal" which was published in 1974 (via), a book "about women, and their lives as women, from one feminist's point of view" (via), "a sort of illustrated encyclopedia of women performing self-limiting roles" (via).

Heyman's "stark portraits of women at work, at home and at weddings gave a visual concreteness to feminist doctrine of the 1970s about the oppressiveness of traditional female roles" (via).

"I have been a girl child and, in my expectations, a mother. I have tried to be prettier than I am. I have been treated as a sex object, and at times I have encouraged that. I have been married and have seen my husband’s work as more important than my own." Abigail Heyman